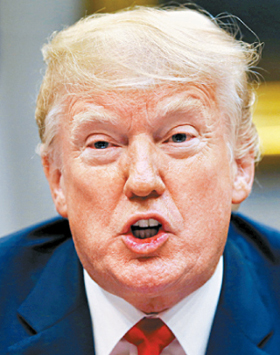 U.S. President Donald Trump on Wednesday said that he stands by his decision to suspend joint military exercises with South Korea, blaming China once again for undermining denuclearization negotiations with North Korea.

He seemed to contradict U.S. Secretary of Defense James Mattis, who said Tuesday that the joint exercises would no longer be suspended.

In a series of tweets that began, “Statement from the White House,” Trump said that North Korea “is under tremendous pressure from China” because of “major trade disputes” between the U.S. and Chinese governments.

The statement said “there is no reason at this time to be spending large amounts of money on joint U.S.-South Korea war games,” an echo of Trump’s decision after a June 12 summit with North Korean leader Kim Jong-un in Singapore to suspend joint military drills as long as the two sides are negotiating a nuclear deal in good faith.

It continued, “Besides, the President can instantly start the joint exercises again with South Korea, and Japan, if he so chooses. If he does, they will be far bigger than ever before.”

The tweets came a day after Mattis said in a Pentagon press conference that the United States has “no plans” to suspend future military exercises with South Korea as the denuclearization negotiations with North Korea hit an impasse.

Large-scale drills between South Korea and the United States, including the Ulchi-Freedom Guardian (UFG) exercise usually held in August, have been suspended since the June 12 summit. Trump declared in a press conference in Singapore immediately after his summit with Kim that the joint “war games” should be halted “unless and until we see the future negotiation is not going along like it should.” He described the joint drills as being costly, provocative and “inappropriate” in a situation where a comprehensive nuclear deal is being negotiated with the North.

In the statement tweeted Wednesday, Trump accused China of providing North Korea with “considerable aid, including money, fuel, fertilizer and various other commodities,” calling it “not helpful.”

Trump said he believes his relationship with Kim is a “very good and warm one,” despite his abrupt cancellation last week of a trip to Pyongyang by Secretary of State Mike Pompeo and Stephen Biegun, the new U.S. special envoy for North Korea. In a series of tweets on Aug. 24, Trump called off Pompeo’s Pyongyang trip because of a lack of “sufficient progress” in nuclear negotiations with the North, adding that China was not “helping with the process of denuclearization as they once were,” citing the United States’ tougher trading stance on the country. Subsequent news reports indicated Trump had been peeved by a reportedly belligerent letter sent by Kim Yong-chol, a vice chairman of the North’s ruling Workers’ Party Central Committee, to Pompeo.

Trump has frequently called on China to do more to help denuclearize the North. Beijing has maintained it stands by United Nations Security Council resolutions on Pyongyang, despite the U.S. president hinting that China may be easing up on sanctions.

The latest White House statement added that the U.S.?China trade disputes and other differences “will be resolved in time” by Trump and Chinese President Xi Jinping, saying that their “relationship and bond remain very strong.”

Seoul has been cautious to avoid getting caught up in the trade war between the United States and China, which has become interlinked with security issues. Since campaign days, Trump blurred the line between security issues, including North Korea’s denuclearization, with trade disputes and deals.

Blue House spokesman Kim Eui-kyeom said Thursday, “it is not appropriate” to remark on the trade dispute between the United States and China as a third country. Likewise, the Ministry of National Defense has remained taciturn on whether a major aerial exercise with the United States, Vigilant Ace, will take place later this year.

Choi Hyun-soo, a Defense Ministry spokesperson, said in a press briefing Thursday that “it has not been decided” whether the Vigilant Ace exercise will take place in December, as was being reported in local media.

Last year, a massive Vigilant Ace drill took place over five days in early December, involving 230 aircraft including the U.S. F-22 Raptor stealth fighters and F-35A fighters and some 12,000 military personnel, and resulted in angry statements from the North.

Annual large-scale joint exercises held by Seoul and Washington during early spring and summer have been a point of contention for North Korea, which sees them as provocations, and have led to periods of heightened military tensions on the peninsula.

China, backed by Russia, has advocated a “double suspension” initiative in which the North declares a moratorium on its nuclear and missile tests in exchange for South Korea and the United States halting joint military exercises. China has also pushed for peace talks with the North to proceed simultaneously with denuclearization negotiations.

Hua Chunying, a Chinese Foreign Ministry spokesperson, responding to Mattis’s remark that the Pentagon does not plan to suspend future South Korea-U.S. exercises, said that the “political settlement” of the Korean Peninsula issue is “facing an important opportunity,” pointing to the “hard-won” outcome of the inter-Korean and North-U.S. summits.

In a press briefing Wednesday, Hua said, “In order to address the crux of the Korean Peninsula issue, China maintains that denuclearization and the establishment of the peace mechanism of the peninsula should be advanced in a coordinated manner.”

She continued that, under the current circumstances, the United States and North Korea “should stick to the right direction of political settlement, maintain the momentum for dialogue, work together to show more goodwill and sincerity to each other and do more to help enhance mutual trust, so as to make joint efforts to move forward the process of the political settlement of the Korean Peninsula nuclear issue.”

Pyongyang has pushed for a declaration to end the 1950-53 Korean War, a largely political decision as the conflict was resolved with an armistice agreement, while Washington has called for an inventory of North Korea’s nuclear stockpile.

Seoul has pushed for the simultaneous advancing of inter-Korean relations along with the denuclearization process, seeing President Moon Jae-in’s third summit with Kim in Pyongyang scheduled for September to be an opportunity to break the current impasse.