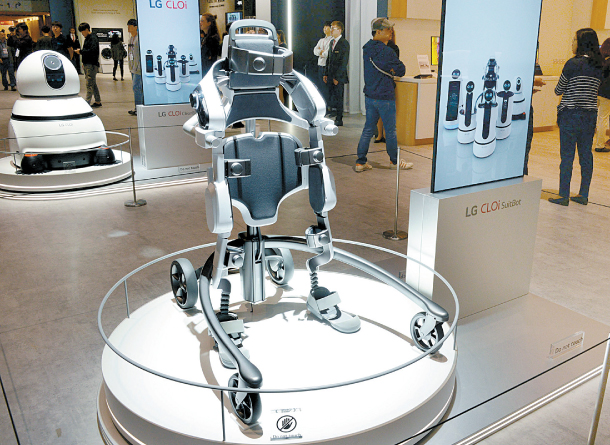 LG Electronics shows the CLOi SuitBot, a wearable robot, for the first time at the IFA tech fair, which kicked off in Berlin, Friday. [LG ELECTRONICS]

The 2018 IFA, the biggest trade show in Europe for electronic appliances, kicked off Friday with a lot of buzz about connected homes, artificial intelligence (AI) and televisions with extraordinary resolution.

IFA is a “place for many different industries - each with their expert knowledge - to share, discuss and develop their innovation and vision,” said Christian Goke, CEO of Messe Berlin, host of the annual tech fair, in a statement. “Nowadays, hardly any company can innovate without partners, alliances or open ecosystems. That brings a new mindset and heralds the Age of Co-innovation.”

Korean tech giants Samsung Electronics and LG Electronics as well as dozens of smaller business operators have booths showing off their latest products.

But Samsung and LG opted for different strategies for this IFA. Whereas Samsung highlighted its technological prowess by showing a few notable new products, LG was more ambitious in unveiling a flurry of new gadgets.

Jo Seong-jin, vice chairman and chief executive officer, and Park Il-pyung, president and chief technology officer, talked about what is next for the company as it looks to the future. They emphasized its signature ThinQ artificial intelligence platform, which has the slogan “Think wise, be free: Living freer with AI.” 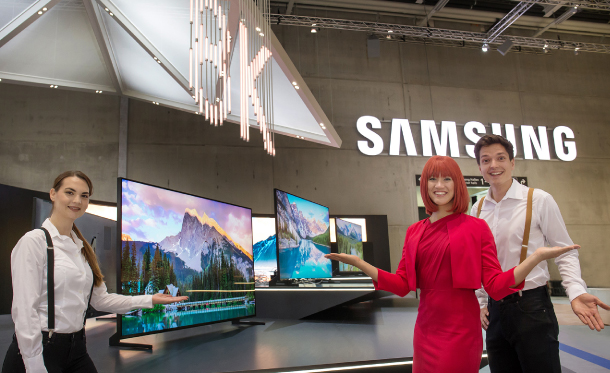 It was the first time that an LG executive delivered a keynote speech at the IFA.

Jo provided his insights into how LG’s AI strategy can change customers’ lives with its “open platform, open partnership and open connectivity” philosophy.

Park explained how LG’s AI technology is being used in refrigerators, televisions and washing machines and why an open AI strategy was designed with the consumer in mind.

Other tech company leaders speaking at the trade show over the next several days include those from Huawei, Microsoft and Amazon.

More than one third of LG’s exhibition space is dedicated to AI, with a range of LG ThinQ products displayed in three different lifestyle zones: ThinQ Travel, ThinQ Gourmet and ThinQ Style. Each zone has been designed to reflect the diverse lifestyles of modern consumers by incorporating AI-enabled products into futuristic home environments.

The ThinQ Travel zone will demonstrate the process of searching for an optimal holiday destination using AI televisions and booking flights and accommodations using the LG G7ThinQ smartphone.

In the Internet of Things (IoT) living room - designed in collaboration with Italian luxury furniture company Natuzzi - the XBOOM AI ThinQ smart speaker shows it can turn on a TV and alter the settings of connected sofas and lighting installations. 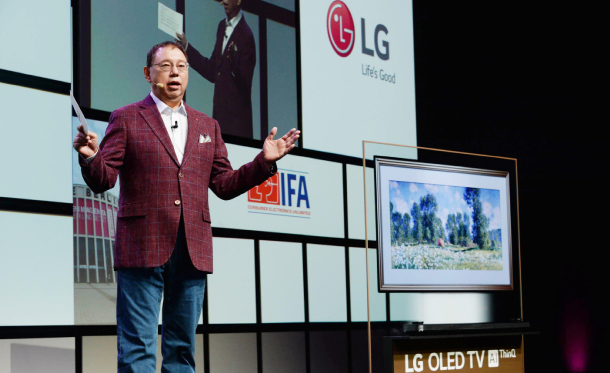 Another eye-catcher will be a collection of advanced robots under the LG CLOi brand name.

The CLOi SuitBot, a wearable robot, is being shown for the first time at the IFA. It is meant to empower humans at work. The robot supports lower limbs and enhances a human worker’s power, helping him lift or move heavy things with ease. That makes it useful in manufacturing and construction. A person with weaker lower-body strength may also use it to more easily walk around.

The robot is equipped with sandal-type shoes and automatically adjusts itself to fit the body.

Samsung took the wraps off an 8K QLED TV, which Kim Hyun-seok, president and CEO of the consumer electronics division, said would “revolutionize the visual display industry.”

He did not disclose the time of their launch or their prices but said Samsung may release them before 2020.

“Samsung has been a leader in TVs for the past 12 years globally and 13 years in Europe,” said Kim at a press conference on Thursday. “We will keep up that status with 8K.”

Currently, 4K televisions account for 70 percent of all televisions sold by Samsung, even though video content for such high-resolution televisions is not widely available. Samsung’s AI technology upgrades the original lower-resolution videos into a format matching the 4K television.

The tech behemoth also showcased The Wall, a 146-inch MicroLED modular screen. It can transform into any size or shape according to a user’s needs. It also eliminates the need for color filters or backlighting.