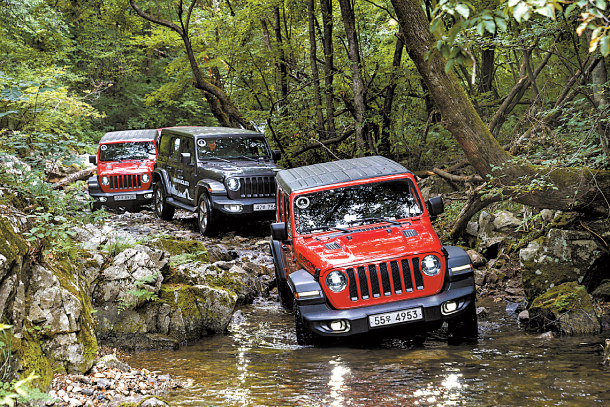 The new Jeep Wrangler, which launched in Korea in August, drives over a stream during a test drive. [FIAT CHRYSLER KOREA]

PYEONGCHANG, Gangwon - It took Jeep 11 years to develop its all-new Wrangler, and after one test drive, it’s clear that all that work paid off. 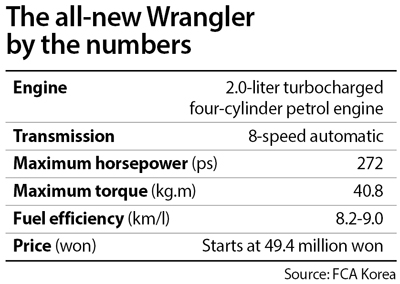 The JL-series Wrangler, which launched in Korea in August, is the first full revamp to the model since the JK series went on sale in 2007.

Jeep’s confidence showed once again in its choice of the test venue for its media event, which was deep in the woods of Pyeongchang County, Gangwon. Reporters’ smartphones couldn’t even find a signal in the area.

The streams, steep hills and rocky roads inside the forest were much more challenging than off-road courses on the outskirts of Seoul usually offered to reporters. The area is usually off-limits, even to hikers.

The half-day trip proved that Jeep’s confidence in the Wrangler’s abilities was warranted.

While living up to its rough-and-ready image, the Wrangler also offered multiple driving-assistance systems and plenty of interior space to satisfy those looking for comfort rather than adventure.

“Ninety-five percent of the car has been upgraded,” said Fiat Chrysler Korea CEO Pablo Rosso at a media briefing in Pyeongchang County on Aug. 21 prior to the test drive session. “The all-new Wrangler is a modern interpretation of the heritage.”

The Wrangler was first introduced as the Willys MB in 1941 as a U.S. military vehicle.

At a glance, the new Jeep’s exterior looks almost the same as its predecessor. It shares the same rectangular body frame and signature seven-slot grille, circular headlamps and square tail lamps. But the front has actually become more voluptuous, giving it a slightly softer, even feminine look.

The Wrangler’s interior and electronic functions received a bigger upgrade.

The interior is equipped with a 7-inch digital cluster behind the wheel as well as an 8.2-inch touch screen in the center to promote diverse infotainment functions and off-road driving.

The Wrangler now has push-button start, but the emergency brake is still on the console rather than on the floor or activated with a button. A separate gear lever to engage four-wheel drive is situated right next to the normal gear knob, making clear that this vehicle is off-road capable.

This Korea JoongAng Daily reporter got behind the wheel of the Sahara edition of the new Wrangler to experience a 90-minute off-road course and a winding 12-kilometer (7.4-mile) road course.

At the start of the on-road course, the Jeep felt heavier than other cars when turning the steering wheel or accelerating. But it didn’t take long to get used to its size and weight on the hilly, winding roads.

The real fun began with the off-road course. With the four-wheel gear knob switched to low gear, the reporters were led up a 40-degree rocky hill. The Jeep managed to get to the top while all the driver could see out of the front window was the clear sky.

The toughest course of the test drive was a 500-meter (1,640-foot) rock-crawling course. It consisted of a stream filled with rocks of various sizes. There was no way to drive around the rocks, and drivers had to go over it.

There were professional drivers standing by just in case any reporter couldn’t finish the course.

With the gear set to low, a slow and steady press on the accelerator kept the Jeep going safely. But rocking from side to side couldn’t be avoided.

When the Jeep once again hit a paved on-road course after finishing this course, it felt much lighter.

Although there wasn’t a chance to test out the new safety and convenience features, the all-new Wrangler has 75 new functions, such as parking assistance, blind-spot monitoring and a heating steering wheel, among other functions.

It is also equipped with Android Auto and Apple CarPlay as well.

The Wrangler comes in four trims: Sport, Rubicon, Rubicon High and Sahara. The Rubicon trims are more centered on off-road functions while the Sahara - the most expensive trim - is more suitable for on-road courses and comes with premium safety features.