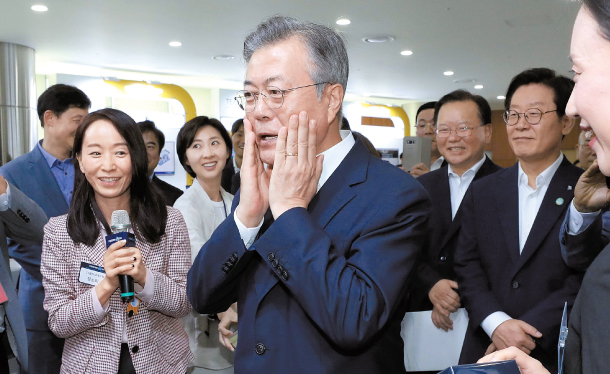 President Moon Jae-in on Friday vowed to eradicate unnecessary regulations hampering the growth of big data-driven industries and stressed the country’s future hinges on such industries.

He also promised to invest 1 trillion won ($898 million) in nurturing the big data industry next year, which he said would assist 100 big data companies and create a workforce of 50,000 specializing in big data.

“The future of our innovative growth hinges on big data,” emphasized the president in a speech delivered at the Pangyo Startup Campus in Seongnam, Gyeonggi. “In order to grow new industries and technology that is built on data, we must quickly carry out deregulatory reform on the use of data.”

Moon’s visit to the campus, which is home to more than 200 local and foreign start-ups, was the third of its kind to promote his deregulatory framework, a pillar of his innovative growth agenda.

His first deregulatory drive involved reforming medical regulations that make it hard to introduce new medical devices. The second was allowing nonfinancial companies to own stakes of more than 10 percent in internet banks and exercising voting rights of 4 percent or more.

Assuring people in the field that he was aware of their difficulties with excessive government regulations, Moon said the government will “take fast follow-up measures” so that they could “feel the impact of regulatory reform in the field.”

“Reforming regulations on big data helps companies, small business owners and consumers together and is directly related to the success of the innovative growth,” said Moon.

Citing the success of ride-hailing company Uber and short-term lodging service Airbnb, both of which make use of big data collected from customers, Moon emphasized the use of big data would “create new service and jobs while improving productivity.”

He said Siemens, the German manufacturer, was able to increase its productivity eight times by adjusting its production lines with the help of big data analysis.

“At a time when a data-driven economy is a worldwide trend, we must form a strategy accordingly in a timely manner,” he said.

Promising the government’s full support for the big data industry, Moon said he would establish what he called a “Data Expressway.”

Innovative growth is one of the three pillars of Moon’s economic agenda. The other two are income-led growth and a fair economy initiative.