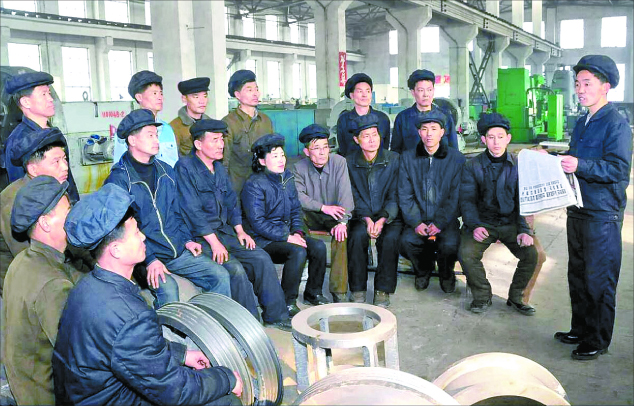 North Korea is dialing up its propaganda — just when inter-Korean relations reached their warmest level in years.

Official media has been busy promoting socialist values and its home-grown ideology, peppered with a dose of vitriol for ideas from abroad.

But analysts think the official rhetoric is basically directed at North Korea’s own elite and masses — warning them not to get carried away with foreign influences at the risk of losing devotion to the party and its supreme leader.

On its page dealing with South Korean issues on Tuesday, the state-run Rodong Sinmun published what it called a bill of indictment written in the name of the Committee for the Peaceful Reunification of Korea (CPRK), the North’s equivalent of the Ministry of Unification in the South.

The article openly attacked South Korea’s conservative parties for opposing inter-Korean cooperation, saying they have “committed treasonous sins against the nation.” It criticized former President Park Chung Hee, who ruled Korea as a strongman from 1961 to 1979, as an anti-unification criminal who overturned the promises he made in the July 4 joint communiqué between the two countries. It also called the conservative administrations of Lee Myung-bak and Park Geun-hye, as a “treasonous gang” and said they took “inter-Korean relations to its worst crisis.”

Ri Son-gwon, the CPRK’s chairman, represented the North during high-level talks on Aug. 13 in the truce village of Panmunjom. Sitting across the table from Ri was South Korea’s Unification Minister Cho Myoung-gyon.

Analysts say that the fact that such an agency openly provided commentary on domestic politics in South Korea is inappropriate at any time, and particularly after the joint pledge by South Korean President Moon Jae-in and North Korean leader Kim Jong-un to end longstanding confrontation in the Panmunjom Declaration from their first summit in April.

That report is just one example of recent amplified rhetoric in North Korean propaganda, despite the continuing rapprochement between Pyongyang and Seoul.

Much of the propaganda is standard from the repertoire of the past, like calling on the people to rally around Kim Jong-un or beating on foreign powers. Less boiler plate is the state-run media’s keen interest in promoting ideological education for the public.

A keyword frequency analysis of the Rodong Sinmun conducted by the office of Liberty Korea Party Rep. Cheong Yang-seog, a member of the National Assembly’s foreign policy committee, revealed that words used by state media pertaining to ideological education increased noticeably since the thaw in relations in comparison to last year, when tensions with the outside world reached its peak after continued nuclear and missile tests by North Korea.

According to the study, the words “class education” appeared 323 times in the first half of 2018 compared to 154 times in the second half of 2017 — a 110 percent jump. The word “capitalism,” in reference to the economic systems of South Korea and the United States, increased 89 percent to 497 times this year compared to 262 times last year. 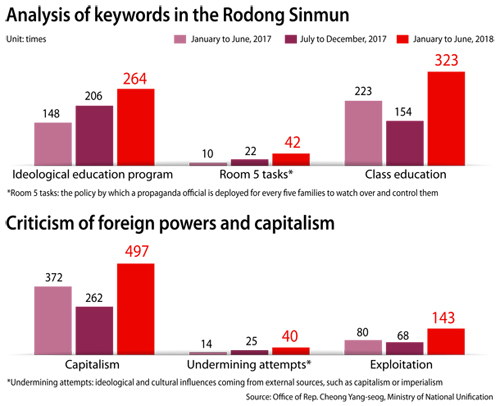 According to Cheong, the regime appears to be ramping up ideological propaganda for fears its elite class or the public at large may be influenced by the South or the United States as its relationship to them warms up.

The word that most frequently appears in the Rodong Sinmun’s propaganda is “socialism,” which is usually used to reinforce the North’s identity in relation to the West. This word appeared 8,050 times in the first half of last year and 8,120 times in the second half. In the first half of this year, it came out 7,875 times, showing it has been emphasized consistently throughout the diplomatic shift. The terms “party cells” (between 1075 to 1174 times from 2017 to 2018) and “imperialism” (between 1094 to 1391 times) were also used at a constant rate.

The reinforced propaganda drive mirrors the situation the last time the Koreas warmed up to each other after years of confrontation. In June 2000, then-South Korean President Kim Dae-jung met then-North Korean leader Kim Jong-il for the first summit between the two countries.

Kim Jong-il demonstrated unprecedented warmth towards his counterpart at the time, even telling Kim Dae-jung that he had “freed me [Kim Jong-il] from hiding.” Such gestures raised hopes in and out of North Korea that the regime was embarking down a new path.

But at the same time, Pyongyang’s state media was waging a campaign that upheld the regime’s legitimacy. With phrases like “reform and opening up is the path to disaster, and we will never allow it” (June 20, 2000, Korean Central Television), and “the Western path is the path to catastrophe and survival is only found through our path” (June 29, a Rodong Sinmun editorial), the regime made clear that rapprochement did not equal fundamental change.

Such rhetoric was also reminiscent of the period of uncertainty that followed the death of Kim Il Sung, Kim Jong-il’s father and founding ruler of the North, in July 1994. Through the state’s propaganda machine, Kim Jong-il declared that no ideological change should be expected from him.
In essence, such pronouncements of constancy can be interpreted as attempts to prevent ideological confusion for the North Korea’s people in the face of uncertainty and expectations of change.

Pyongyang also remains particularly sensitive about engaging in people-to-people exchanges with Seoul, despite two summits with the South in April and May and a third scheduled for September. While it remains relatively tolerant to the idea of resuming visits by South Koreans to the North, no mention has yet been made about the reverse. Other than professional athletes or musical performers, ordinary people are not allowed to visit South Korea, which is probably why the recent reunions of families divided by the Korean War took place on the North’s side of the border at the Kumgang Mountain resort.

When the first instances of such meetings between separated families took place after the leaders of the two Koreas signed the June 15 joint declaration in 2000, North Korean family members were allowed to visit Seoul, stay at the Walkerhill Hotel and even visit some tourist sites in the South’s capital. Having witnessed South Korea’s level of economic development, these people described what they saw to family members and neighbors back in the North, which riled authorities. For this reason, the North’s officials were particularly stubborn on insisting the reunions take place on their territory this time around.

According to South Korean authorities, the North did not allow their people who attended the reunions return home immediately afterward. They made them stay in Pyongyang to undergo ideological re-education. A high-level defector from the North says this education involves self-criticism by the attendees in regard to the problems that ensued during the family reunions. Attendees were forced to write down the content of their conversations with family members from the South and had to surrender any presents or cash they received during the reunions. Two to three weeks of collective living were said to follow the re-education session to “remove any South Korean influences,” said a South Korean government source.

September marks a series of key events in the North in regard to inter-Korean relations and the diplomatic situation on the peninsula. North Korea celebrates the 70th anniversary of the foundation of its government on Sept. 9, followed by summits between its leader Kim Jong-un with Chinese President Xi Jinping and South Korean President Moon Jae-in. There’s a possibility that Kim could visit the UN General Assembly, although that seems less likely in the wake of the canceling of Secretary of State Pompeo’s visit to Pyongyang this week. In the meantime, the North’s propaganda authorities remain on high alert — and ready to work overtime.