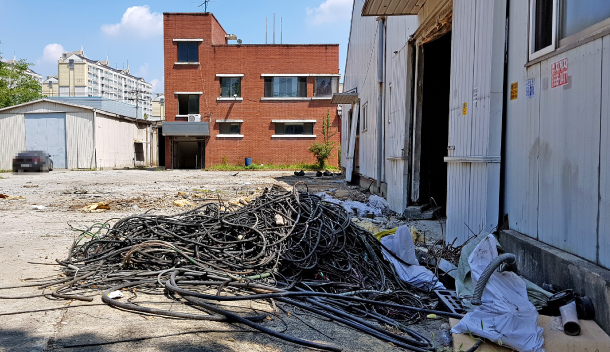 Metal parts from a manufacturing facility are dumped outside a factory after it closed down recently in Cheonan, South Chungcheong. [SHIN JIN-HO]

Mr. Kim is closing down his textile factory in the South Chungcheong city of Cheonan. He is one of thousands in the country, and the number is picking up pace.

“The business went downhill from two years ago,” Kim said. “And now with the hike in the minimum wage, I decided to go for a merger with another factory.”

When the JoongAng Ilbo visited Kim’s factory on Aug. 8, an excavator was inside the factory, tearing apart the conveyor belts and metal parts of the production line.

“When this place had enough business, we could feed the families of some 40 employees,” Kim said. “Thinking how it all turned out drives me nuts.”

Close to Kim’s factory, some five companies are also closing down. And this rusting of Korea’s manufacturing sector goes beyond Cheonan.

On the flip side, fewer factories are opening. The NTS said 7,620 factories opened from January to May this year, a 7.4 percent drop compared to the same period last year.

Additionally, many factories that remain open are not running at full capacity due to weak demand for their products. The Korea Industrial Complex Corporation said Thursday that 40 public industrial complexes - factory towns designated and supported by the government to help local economies - are operating at 82.6 percent capacity. Counting all industrial complexes, public and private, Statistics Korea said they were operating at only 73.9 percent capacity in May.

The statistics come to life in a factory complex in Ulju County, Ulsan. The 338-acre area was originally planned to be home to factories from 75 companies. Only 58 ended up setting up shop, of which most are small and medium-sized companies that manufacture automobile or metal parts for Hyundai Motor Company and Hyundai Heavy Industries, a troubled shipbuilder, according to a local real estate agency.

When the JoongAng Ilbo visited on the afternoon of Aug. 9, the roads inside the complex remained largely empty apart from a cargo truck passing by occasionally.

“Hyundai Heavy Industries has not been able to procure orders for a while, and some five to six affiliated companies went bankrupt,” said a real estate agent who asked not to be named.

“The heads of some of these manufacturing companies tell me that the sector is not just having a hard time - its time has run out,” said another agent.

Some factory owners complained that the Moon Jae-in administration’s minimum wage hike is hastening their ultimate demise. At the beginning of the year, the administration raised the minimum wage to 7,530 won ($6.77) per hour from 6,470 won last year.

An automobile parts manufacturing factory in Changwon, South Gyeongsang, had just two people managing the factory on Aug. 14. They were the owners.

“We used to have six people working together when the factory opened 15 years ago,” said the 40-year-old factory owner surnamed Kim. “But we let them all go this year after the monthly minimum wage rose from some 2 million won to around 3 million won. How could we keep them when we weren’t making more money than before?”

Kim’s factory is located in an industrial complex in Changwon. The complex has 4,698 factories, of which 150 are being run by the owners, like Kim, without any other employees.

Others are leaving the business altogether.

“I will never ever try my hand again in the manufacturing sector,” said Mr. Gil, a 62-year-old owner of an automobile parts factory in Ulsan, who said he is shutting down his 30-year-old business soon. “With the conglomerates taking over the market and rising labor costs, businesses stuck in the middle like us just can’t survive.”

But there is no easy way out for people like Gil, especially if they hope to sell their businesses.

“We have some 20 factories for sale in the area,” said a real estate agent at an industrial complex in Incheon. “People keep coming to the agency - but to sell, not to buy.”

Some 100 factories are on the market in an industrial complex in Ansan, Gyeonggi, according to a local real estate agency.

“The number of factories on sale has been increasing from 2016,” said Kim Shin-il, a real estate agent in Ulsan. “But it really spiked from the latter half of last year. The prices of these factories keep dropping, but that doesn’t help them sell because the manufacturing sector is doing so badly.”

The lack of a globally competitive edge is one of the factors behind Korea’s struggling manufacturing sector, some experts said.

“South Korea has lost its international competitiveness in manufacturing,” said Cho Myeong-hyeon, a professor of corporate strategy at Korea University Business School. “That has led to a drop in its exports, the engine of the Korean economy. That’s why factories are shutting down.

“One way to reverse the trend is for Korea to find a niche in the fourth industrial revolution market,” he said. “Like in the cloud service industry, blockchain or artificial intelligence.”

Some blamed the minimum wage hike.

“The minimum wage hike translates into something like a 30 percent raise,” said Lee Byung-tae, professor of IT economics at Korea Advanced Institute of Science and Technology. “From the point of view of small-and-medium sized business owners, they have to pay their workers more while the sector is not doing well internationally. That naturally leads to decisions to close down businesses and factories.”

A stagnant economy is another factor. Job portal Saramin asked 390 companies what is the biggest threat to their business, and nearly 30 percent said a stagnant economy stemming from a lack of consumer spending.