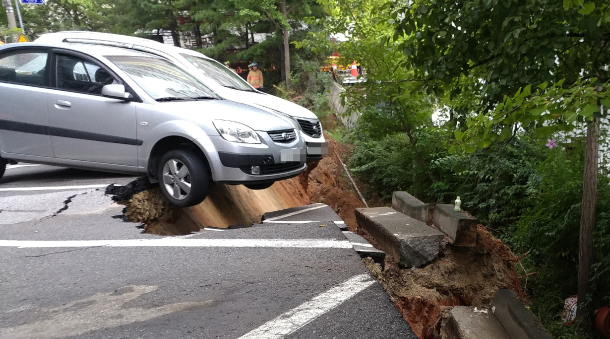 Cars hang precariously on the edge of a sinkhole that formed near an apartment complex parking lot in Geumcheon District, southern Seoul, on Friday. [NEWS1]

A giant sinkhole appeared near a construction site in Geumcheon District, southern Seoul, on Friday morning, leading to the evacuation of some 150 residents.

“I heard a sound as if a cannon had been fired in the vicinity,” said Jang Seok-jin, 76, who lives nearby. “I heard people gathering outside, so I went out when the security office told me to leave my apartment.”

A sinkhole measuring 100 feet by 32 feet and estimated to be about 20 feet deep had formed a few steps from Jang’s apartment at 4:38 a.m. on Friday, local authorities said. No injuries were reported.

The Geumcheon District Office said there was no immediate danger to residents, but they were not allowed to return to their homes until a full inspection was complete. In the meantime, the office had set up temporary shelters in the area.

“We have not found any signs of danger to the apartment complex,” Lee Soo-gwon, an architecture professor at Dongyang Mirae University, told reporters after a safety inspection of the site, “but we have to investigate further before we can announce the facts about the incident.”

The sinkhole was located between the apartment complex’s parking lot and the construction site of a 20-floor building.

The building, under construction since January, was to have three floors underground. The ground was dug up, and construction workers recently began laying out the frame and structure of the underground floors.

There was no construction work going on at the time of the incident, authorities said.

“The construction company had dug about 15 meters [50 feet] into the ground when the incident happened,” said an employee at the Geumcheon District Office. “Since the incident, the company has been filling up the hole just in case.”

Residents claim the sinkhole was a man-made disaster caused by the construction company’s negligence.

“There was already a crack there, wide enough to put a hand into,” said Cho Seok-hyun, head of a community of residents at the apartment complex. “When we visited the site yesterday [Thursday], we could see that the company had poured cement into the crack, so they knew about the crack but did not take proper action.”

The JoongAng Ilbo confirmed through a photo of the site taken before the sinkhole that the company had filled the crack with cement. The company, however, refuted the allegation.

“If we had known that it was a sign of a sinkhole, we would have taken appropriate measures,” a spokesman for the company said. “We need to investigate the matter further.”

Residents had been complaining about the construction project from the beginning. Some claimed they heard and saw signs of a sinkhole developing from a day before.

“From around 10 a.m. Thursday all the way into the night, I heard these sounds as if steel bars were dropping to the ground,” said a 64-year-old resident surnamed Park. “I just thought they must be going on with the construction, even into the night.

“Then around 4:45 a.m., I heard a booming sound. I thought my apartment was coming apart.”

Local authorities said recent heavy rains might have been the cause. It rained a total of nearly 6 inches in the district from Monday to Friday.