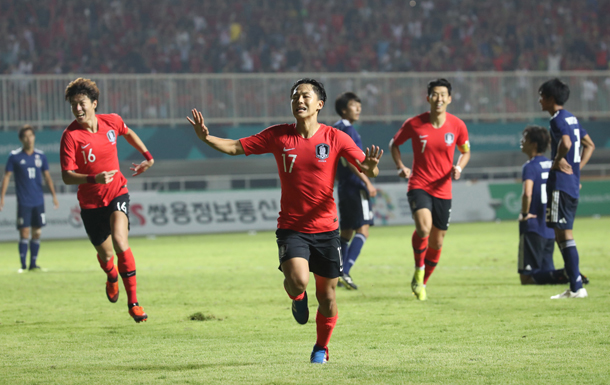 The Korean national football team celebrate after Lee Seung-woo, center, scores the team's first goal in extra time during the final match against Japan at Pakansari Stadium in Cibinong, Indonesia on Saturday. [YONHAP]

Korea beat Japan 2-1 to defend their men's football title at the Asian Games on Saturday.

Lee Seung-woo and Hwang Hee-chan scored a goal apiece in extra time at Pakansari Stadium in Cibinong, south of Jakarta, to help Korea earn a gold medal at the 18th Asian Games.

This was the first time that Korea and archrivals Japan have gone head-to-head in the men's football final at the Asian Games.

Korea deployed a 4-3-3 formation with an attacking trio of Hwang Ui-jo, Son Heung-min and Hwang Hee-chan.

Korea produced a promising chance just after six minutes. Son made a through ball to Hwang In-beom, whose cross in the box failed to meet Hwang Ui-jo by inches.

Hwang Ui-jo, who is with Japanese club Gamba Osaka, fired a left-footed strike in the 23rd, but it was saved by Ryosuke Kojima.
Japan then fought back with Koji Miyoshi, who penetrated into penalty box and fired a left-footed shot from close range in the 28th that stung the palms of Jo Hyeon-woo.

Son upped the ante in the 55th minute with a left-footed strike just out the box, but it was easily stopped by Kojima.

Korea put Lee Seung-woo on for Kim Jung-min in the 57th minute to reinforce their offense.

In the 64th, Hwang Hee-chan penetrated the right side of the Japanese defense and delivered a fine cross for Hwang Ui-jo. But Hwang Ui-jo's close range effort went off target.

Korea fielded Jang Yun-ho for Lee Jin-hyeon in the 88th to reinforce midfield.

Less than 30 seconds into extra time, Son intercepted the ball from midfield and went for goal. But his left-footed attempt narrowly missed the target. A minute later, Kim Moon-hwan's cross hit the bar.

Lee Seung-woo then stepped up. Kim Min-jae threaded a ball to Son, who cut through in the center. Son's last touch was long, but Lee Seung-woo was on the right spot at the right time as his left-footed strike found the net in the 93rd.

Korea didn't stop there. In the 110th, Son delivered a free kick from the left flank, and Hwang Hee-chan headed it down for a 2-0 lead.
Hwang Ui-jo could have given Korea a comfortable lead in the 115th, but his strike with his left foot flew left of the post.

But Japan didn't give up. The Blue Samurais cut the deficit to one with five minutes left on the clock. Ayase Ueda met Ryo Hatsuse's corner kick and kept up the intensity of the match.

Japan had a couple of chances to level the score with two minutes of additional time given, but Korean held on for the victory and the precious gold medal.