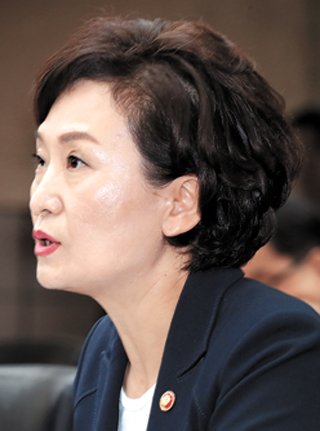 The real estate market was rocked on Friday when Land Minister Kim Hyun-mee told reporters that the government is looking into rolling back the various tax breaks given to registered landlords in its continued bid to cool the overheated housing market.

Kim said the government is currently working with related departments to come up with improvements in the tax benefits given to landlords.

“We believe there are too many tax benefits on registered lease apartments,” Kim said. “Whilst there is [a positive] effect in encouraging landlords to report to the government - such as ensuring rent remains stable for more than 8 years - recently there have been those that try to use [the tax benefits] as a tool to purchase new apartments.”

The land minister also said that starting next month the government will be running an information system dedicated to apartment rent.

The system will gather various data including ownership of apartments, transaction data and tax information.

“Once this system goes online, we will be able to know how many apartments a person owns and how much they are renting the apartments for, regardless of whether they have reported them to the government or not,” Kim said.

She said that landlords that fail to properly register with the government will be audited by the tax agency.

The government has recently been intensifying its crackdown on rising apartment prices; including potentially raising the assessed value and tracking down those that have purchased apartments through illegal means including possible tax evasions.

However, the tax benefit rollback could face a strong backlash as it has been less than a year since the government began pushing people to register their rental apartments.

In December, in an effort to make income from rent more transparent and increase the supply of stable rental apartments, the government introduced numerous tax cuts that will go into effect on Jan. 1, 2019.

This special tax cut only applies to those that have rented out their property for eight years or more. Renters will also get a reduction on property taxes when they rent out a unit that is 40 square meters (430 square feet) or smaller.

The number of people who have been reporting their apartment rental prices has been increasing sharply since the beginning of the year.

In the first seven months of this year, 80,539 people have reported their rental properties to the government, which is a 164 percent increase from the 30,497 people that registered a year ago.