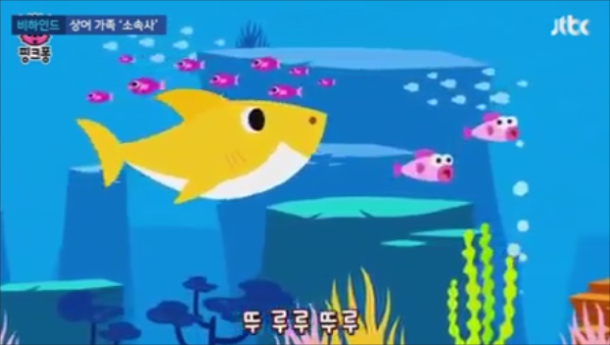 A Korean children’s song brushed shoulders with big name musicians on the Official UK’s Singles Chart this week. “Baby Shark,” a viral video from Pinkfong is in at No. 37 on the Official UK Singles Chart for the week from Aug. 31 to Sept. 6, alongside boygroup BTS’s new song “Idol,” at 21st place. Big name stars like Ariana Grande, Nicki Minaj and Ed Sheeran also appear on the list, with American producer Benny Blanco taking the top spot.

The children’s song, an adapted version of an old North American ditty by Korean content company SmartStudy, entered the chart for the first time two weeks ago and continued to climb up the ladder to reach the 37th spot. The song was made for educational purposes and released in 2015.

The YouTube video of the repetitive song has more than 1.6 billion views. It is a little over two-minutes long and shows children dancing alongside an animated shark family and other sea creatures.

Meanwhile, boygroup BTS broke its own record on the UK’s singles chart in the same week. At No. 21, “Idol,” one of the most popular tracks from its newest album, surpassed the group’s previous best, set by “Fake Love” at No. 42 last May.