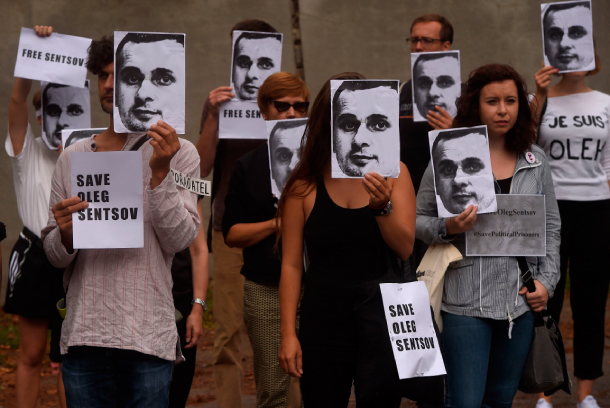 VENICE - A top Russian film-maker made an emotional plea to Moscow Saturday to save the life of jailed Ukrainian director Oleg Sentsov who has been on hunger strike for 111 days.

His voice cracking, Victor Kossakovsky begged the Russian authorities to free Sentsov, 42, who was arrested in Crimea after Moscow’s 2014 annexation of the peninsula and has been languishing in a remote Russian Arctic prison since.

He was jailed for 20 years for terrorism and arms trafficking with little hope of release after a trial denounced as “Stalinist” by Amnesty International.

Kossakovsky said he prayed Moscow would spare Sentsov’s life “not as a political act but as an act of compassion” as his new documentary about ice, “Aquarela,” was premiered at the Venice film festival.

“As a human and a colleague I cannot forget his 111 days on hunger strike. This is not a political but a human act,” he said.

“We must not forget him. You must write, write, write,” he told reporters. “We have to tell him we remember him.”

Sentsov started his hunger strike in May in the run-up to the World Cup demanding the release of all 64 Ukrainian political prisoners held in Russia.

International calls for his release have grown as his health has reportedly deteriorated and in late July the European Court of Human Rights urged Moscow to provide him with “appropriate treatment.”