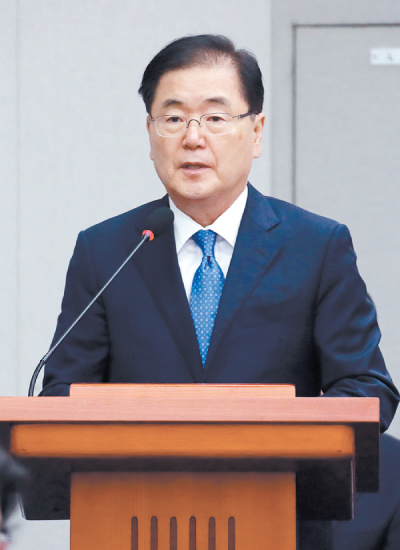 As part of the role, Chung will travel to Pyongyang on Wednesday to plan a summit between Moon and North Korean leader Kim Jong-un set to take place later this month.

The group includes the same people who were in the South Korean delegation that traveled to Pyongyang in March, a meeting that set momentum for summits between the two Korean leaders and between a sitting U.S. president and the North Korean leader. In a news briefing on Sunday, Kim Eui-kyeom, the Blue House spokesman, said the same people were retained “taking into consideration the importance of maintaining continuity in negotiations with the North.” The group fly to Pyongyang on Wednesday morning and return on the same day.

Unlike the first special envoy trip to Pyongyang in March, which lasted two days, “the two sides have built up mutual trust, and we are both aware of the content, so we are determined that our goals can be achieved within a day trip to the North,” presidential spokesman Kim said.

The Blue House first announced it would send a special envoy to Pyongyang on Friday. The expressed task was to plan Moon’s upcoming summit with North Korean leader Kim Jong-un. The delegation, however, could also attempt to rebuild trust between North Korea and the United States amid an apparent deadlock on denuclearization talks.

Chung is expected to carry a letter from Moon addressed to Kim Jong-un as he did in his first trip as special envoy to North Korea in March.

That time, after returning from Pyongyang, he immediately headed to Washington and told U.S. President Donald Trump that Kim Jong-un was committed to denuclearization and had pledged to halt nuclear and missile tests. The meeting prompted Trump to agree on a summit with the North Korean leader.

On April 27, Moon and Kim Jong-un held their first summit on the southern side of the border village of Panmunjom. They had another surprise summit on May 26, this time on the northern side, after Trump briefly canceled his meeting with Kim Jong-un in an open letter.

Summit planning resumed shortly after the Moon-Kim meeting, leading to the landmark Trump-Kim summit on June 12 in Singapore.

Chung’s delegation met Kim Jong-un during their first trip, but it is unclear if the special envoy will meet with him this time around.

“We are not at a point where we can confirm a meeting with Chairman Kim Jong-un,” presidential spokesman Kim said, indicating that talks to arrange a meeting are still underway.

The delegation’s main agenda item will be confirming the date and schedule for a third Moon-Kim summit in Pyongyang, the spokesman said. Another important item is “advancing inter-Korean relations by comprehensively negotiating” the contents of the Panmunjom Declaration signed by both Korean leaders in April and the joint statement signed by Trump and Kim Jong-un in June.

The topic of a declaration to formally end the 1950-53 Korean War, which concluded with an armistice agreement rather than a peace treaty, “will of course be included on the agenda, as will complete denuclearization and the establishment of permanent peace on the Korean Peninsula,” Kim added.

The trip comes at a critical time in talks between North Korea and the United States, especially after Trump on Aug. 24 abruptly canceled a scheduled visit to Pyongyang by Secretary of State Mike Pompeo and his newly appointed special representative for North Korea policy, Stephen Biegun, citing lack of progress in negotiations.

In South Korea, there had been interest on whether Im Jong-seok, the presidential chief of staff who also led the committee on Moon’s first inter-Korean summit, would be part of the delegation to the North. His appointment would indicate how gravely the Blue House is assessing the current situation.

However, Kim Eui-kyeom made no mention of Im, even though he is widely seen as overseeing inter-Korean relations at large. A senior Blue House official, speaking on the condition of anonymity, said “President Moon decided on [the delegation’s] structure after much deliberation. That is because in a situation where North-U.S. relations have become strained, a special envoy has a more important role than in the past.”

One diplomatic source said, “If this was just about discussing the inter-Korean summit, then a meeting of high-level officials would have sufficed, but sending a special envoy at this time indicates that President Moon wants to sort out the denuclearization issue properly before heading to Pyongyang.”

The U.S. State Department has been emphasizing that inter-Korean relations must advance alongside denuclearization talks, an indication that Washington will continue to put pressure on Pyongyang. A State Department official told the Voice of America on Saturday, “Progress on inter-Korean relations must happen in lockstep with progress on denuclearization.”

The official also repeated a principle that both Washington and Seoul have been emphasizing: “The improvement of relations between North and South Korea cannot advance separately from resolving North Korea’s nuclear program.”

Shin Beom-chul, head of the National Security and Unification Center at the Asan Institute for Policy Studies in Seoul, said, “The worst result would be for inter-Korean relations to advance alone without progress in denuclearization. We need to take into consideration that in such a case, South -U.S. cooperation will definitely collapse, and it will become difficult to expect any progress in denuclearization. In this case, North-U.S. relations will also sour because of sanctions.”