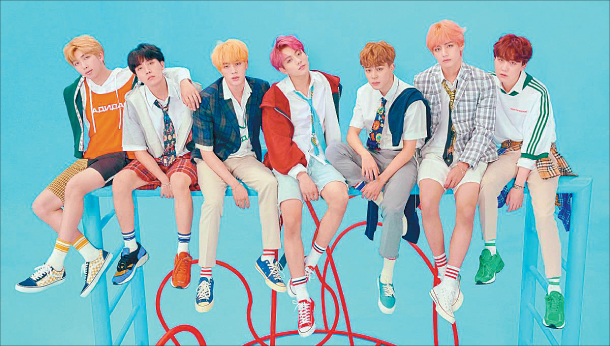 “Love Yourself: Answer,” the latest album by K-pop group BTS, topped the Billboard 200 Albums chart on Sunday, their second chart-topper since May, when “Love Yourself: Tear” made No. 1. [BIG HIT ENTERTAINMENT]

BTS has hit the top of the charts again.

The phenomenally popular K-pop boy band’s latest album, “Love Yourself: Answer,” scored No. 1 on the Billboard 200 Albums chart on Sunday.

It was just three months ago that “Love Yourself: Tear” climbed to the top of the same chart, a first for a Korean pop group. That album’s main track, “Fake Love,” reached 10th place on the Billboard Hot 100 chart and remained there for six weeks - another first for a K-pop group.

The final album in the “Love Yourself” trilogy sold 185,000 album-equivalent units in the week ending last Thursday, said Billboard citing Nielson Music, which includes sales of physical albums, song downloads and streaming. The chart “ranks the most popular albums of the week in the U.S. based on multi-metric consumption as measured in equivalent album units,” according to Billboard.

Those sales are the third largest for a pop album on the Billboard chart this year, after Justin Timberlake’s “Man of the Woods” which sold 293,000 album-equivalent units and Ariana Grande’s “Sweetener,” with 231,000.

As of Monday, the music video of the album’s lead track “IDOL” was viewed more than 124 million times on YouTube, with the number rising daily. BTS sold 868,052 copies of “Love Yourself: Answer” within the first week of its release on Aug. 24, marking a successful finale to the two-year “Love Yourself” series. “IDOL” also set a new YouTube record by getting over 100 million views in less than five days after its release, the shortest time in the history of K-pop.

Compared to the band’s previous videos, “IDOL” makes many references to Korean traditions and customs, including costumes that resemble hanbok (traditional Korean dress), a Korean pavilion that serves as a stage and some musical elements adapted from gugak (traditional Korean music). BTS will set out on a world tour of 16 cities in the United States, Canada, Britain, the Netherlands, Germany, France and Japan from September through next February.