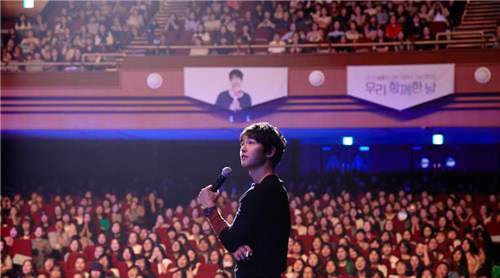 Song Joong-ki hosted a meet-and-greet on Saturday to mark the 10th anniversary of his acting debut.

His agency, Blossom Entertainment, said the event, held at the campus of Kyung Hee University in eastern Seoul, attracted avid fans from all across Asia.

The actor, best known for his role in the sensationally popular television series “Descendants of the Sun,” talked about his career and spoke candidly about his thoughts on acting and life in general.

He also hosted a talk show on stage where he invited fans to share their stories.

Actor Lee Kwang-soo, a longtime friend of Song, joined the stage as a special guest.

“It feels weird that this year marks the 10th anniversary of my debut,” Song said. “So many good colleagues I’ve met so far have helped me cope well in this industry in which one can easily become lonely and exhausted.

“I am ready to go for the coming 10 years. I will do everything to show new aspects of myself and give better performances. It’s been an honor to be with you for 10 years.”

Song is busy preparing for the upcoming tvN drama “Asdal Chronicle.” The cable channel has yet to confirm the broadcast schedule.