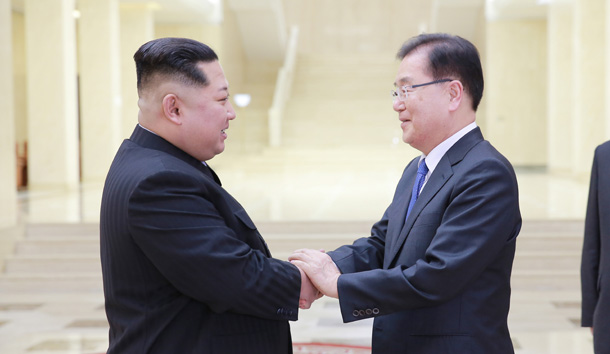 When the vice director of North Korea’s Workers’ Party Kim Yo-jong visited South Korea in February, an unusual scene was spotted. At the Blue House photo shoot, Chief of Staff Im Jong-seok stood next to President Moon Jae-in. On the last day of her visit, Im also hosted the dinner banquet, not the minister of unification. So there was speculation that Im oversees inter-Korean relations and would be sent to North Korea as a special envoy.

Around that time, I met a North Korean defector who had been a party executive in the North. I asked, “North Koreans would know about Lim Su-kyung because she visited North Korea in 1989. How about Im Jong-seok?” He responded, “All North Koreans raved over Lim’s visit. I was studying abroad but returned to see her. About Im Jong-seok, people who are middle and upper classes all know about him and view him positively.”

Leaders would send a special envoy when drawing a big picture that may change the future of a country or to seek a breakthrough. They would choose someone who understands their intentions and is capable of delivering the message. The envoy is especially effective when he is trusted by the other party. Therefore, until the Blue House announced the plan to send a special envoy to the North and tapped National Security Adviser Chung Eui-yong as head envoy, speculation about sending Im continued. But the Blue House scrapped the Im card in fear of repercussions for his trip to Pyongyang because Im — as head of the National Council of Student Representatives in 1989 — sent Lim to the North.

On March 6, Chung went to the media room at the Blue House after returning from North Korea. “Pyongyang clearly stated the will for the denuclearization of the Korean Peninsula. They made it clear that there is no reason to possess nuclear weapons if military threats are removed and regime security is guaranteed.”

Three days later, he met U.S. President Donald Trump at the White House and gave a briefing. “I told President Trump that, in our meeting, North Korean leader Kim Jong-un said he is committed to denuclearization” he said.

Since then, the U.S. and North Korea have held a summit, but denuclearization is as elusive as ever. On Aug. 19, White House National Security Adviser John Bolton said that the “denuclearization of North Korea within a year” was proposed by Moon and agreed by Kim. His remark reflects growing skepticism on the North’s willingness to give up its nuclear programs. If an envoy makes a good interpretation of Pyongyang’s words and delivers them to the world, it makes things more complicated. The problem can only be solved when Kim himself expresses a willingness to denuclearize.