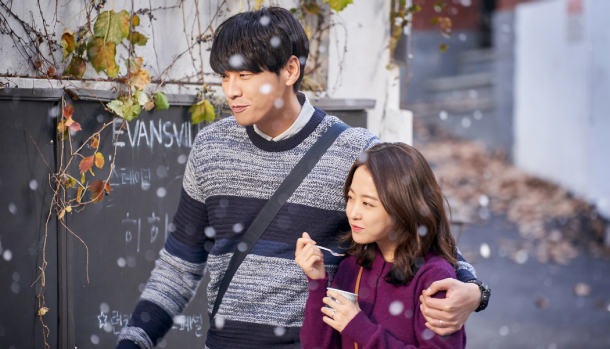 Director Lee Seok-geun’s romance drama “On Your Wedding Day,” starring Park Bo-young, right, and Kim Young-kwang as a couple, stayed at the top of the box office for a second consecutive weekend. [MEGABOX JOONGANG PLUS M]

“High Society,” Lotte Entertainment’s ambitious release for the second half of this year, debuted at a disappointing third, pushed down by romance flick “On Your Wedding Day” and “Searching,” a thriller starring Korean-American actor John Cho. Although “High Society” was the only commercial flick to be released last week, the movie still failed to pull in an audience.

According to data provided by the Korean Film Council, Byun Hyuk’s “High Society” sold 290,000 tickets in its debut weekend from Friday to Sunday. The luxurious drama sold a total of 510,000 admissions to negative reviews, mainly stemming from the exaggerated portrayal of unnecessary sexual scenes and shallow plot, since it hit theaters on Wednesday.

The R-rated drama revolves around Tae-jun (Park Hae-il), a highly respected and popular economics professor at a university, and his wife Su-yeon (Soo Ae), a curator at a high-profile art gallery operated by a conglomerate, who aspires to become the director of the gallery.

“On Your Wedding Day” held the top spot in its second weekend, selling 568,000 tickets. The romance flick, starring Park Bo-young and Kim Young-kwang, depicts the unfortunate timing of a couple’s relationship.

Despite the cliche plot and hackneyed scenes that are reminders of many popular Taiwanese boy-meet-girl films like “You Are the Apple of My Eye” (2011), the Korean romance drama has received favorable reviews from romance-thirsty audiences and has gone on to sell a total of 1.95 million tickets since its release on Aug. 22. The movie surpassed its break-even point of 1.5 million admissions in less than 10 days.

After the lead detective on the case fails to find a single lead for Margot’s whereabouts, David becomes suspicious of the people around him and decides to take things into his own hands. 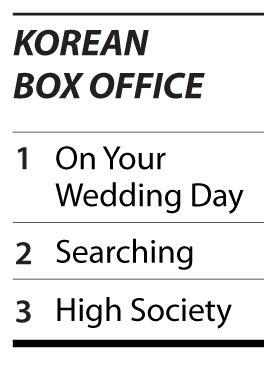 Despite the common father-daughter thriller plot, which is reminiscent of Liam Neeson’s “Taken” franchise, the movie approaches the subject by confining the setting to the virtual world and telling the story via screens and smartphones.

Summer thriller “The Witness,” starring Lee Sung-min as an ordinary office worker who encounters an inner conflict of whether to report a murder case he witnessed to the police, rounded out the top five with its total ticket sales now standing at 2.45 million.