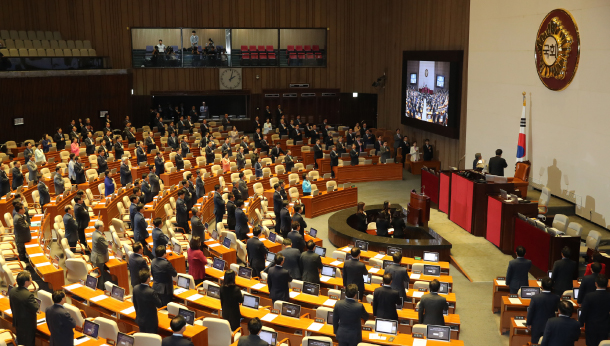 The National Assembly convenes its regular session on Monday. On the docket during the 100-day session are key bills aimed at propping up a slowing economy and deregulating businesses. [YONHAP]

President Moon Jae-in on Monday asked the National Assembly to ratify the Panmunjom Declaration signed by himself and North Korean leader Kim Jong-un during their summit in April, stressing that it would provide “great momentum” for settling peace in the region.

Making note of his decision to send a special envoy to Pyongyang on Wednesday to discuss another summit with Kim, Moon emphasized that National Assembly’s approval of the Panmunjom Declaration, which outlined several inter-Korean projects and included pledges of peace between the two countries, would be a symbolic gesture that could foster inter-Korean cooperation and ease military tension between the two countries. It would commit the country to a “nuclear-free Korean Peninsula,” he said.

“If the National Assembly supports Panmunjom Declaration in bipartisan spirit, it will provide great momentum for us toward establishing peace on the Korean Peninsula,” he said in a meeting with top aides at the Blue House.

Moon’s plea was echoed by National Assembly Speaker Moon Hee-sang, who in his opening speech at the assembly’s regular session on Monday urged lawmakers from all parties to support the agreement.

“I ask ruling and opposition parties to work across the aisle to help put in place peace on the Korean Peninsula,” he said, “and I hope the National Assembly will process the April 27 Panmunjom Declaration during this regular session.”

Citing a recent poll in favor of ratification, Moon Hee-sang said, “Aside from anything else, 72 percent of the Korean people are giving overwhelming support for its passage. What reasons are there for hesitation?”

But the largest opposition party, the Liberty Korea Party, has refused to fall in line, contending that the North’s denuclearization should come first before discussing ratification of any agreement.

Two previous inter-Korean agreements, signed by the leaders of the two Koreas in June 2000 and October 2000, also failed to be ratified in the National Assembly because of heavy opposition.

To ratify the Panmunjom Declaration, a majority of the 299-member National Assembly, or 150 lawmakers, have to participate in voting, and a majority of those lawmakers must vote for ratification.

Under such circumstances, the ruling Democratic Party could ratify the Panmunjom Declaration without support from the Liberty Korea Party, since there are 129 of them in the National Assembly. The 14 lawmakers in the center-left Party for Democracy and Peace have also said they would vote for ratification.