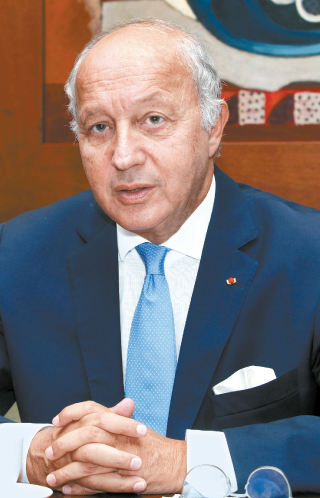 Laurent Fabius, president of the Constitutional Council of France, said Korea, with its knowledge and skills in renewable energy, could be a strong supporter of France’s bid to introduce a legally binding international agreement on environment protection.

“Korea has high quality skills, including in the renewable energy sector,” Fabius told a group of reporters Monday at the Grand Hyatt in central Seoul. “Such skills are essential in environmental protection. And I know the country has remained active in the issue, as one can see through the presence of groups here such as the Green Climate Fund and the Intergovernmental Panel on Climate Change.”

Fabius arrived in Korea on Monday to commemorate the 30th anniversary of the Constitutional Court of Korea, which was celebrated on Sept. 1. As the former president of the UN Climate Change Conference in Paris in 2015, Fabius emphasized the importance of having an internationally legally binding agreement to protect the environment.

“People may think that the constitutional court may not deal with environmental laws on climate change and biological diversity,” he said. “But I think that more and more the court should be able to deal with more general laws such as these.

“France has been working on the Global Pact for the Environment, which is going through a process at the UN and is being supported by Korea,” he said. “We are trying to make the pact a globally legally binding agreement that will cover all topics of environmental issues that are being dealt with separately through separate associations and agreements.”

The hope is that a legally binding agreement will prevent situations like U.S. President Donald Trump withdrawing his country from the 2015 Paris Agreement on climate change. Under the agreement, 196 countries agreed to make contributions to limit carbon emissions to put a cap on rising global temperatures.

“The Paris Agreement signed during the time of the Barack Obama administration is not legally binding for the succeeding leader to follow up with what was agreed then,” Fabius said. “But it is an unfortunate decision on the part of Trump to withdraw from the agreement, because it sets a possible precedent for other countries to follow and it is also not the best decision in the interest of the United States’ businesses.”

In signing the Paris Agreement, Korea said it would try to reduce greenhouse gas emissions by 37 percent by 2030.

“Korea was supportive of the Paris Agreement in 2015 and we are thankful for that,” he said.