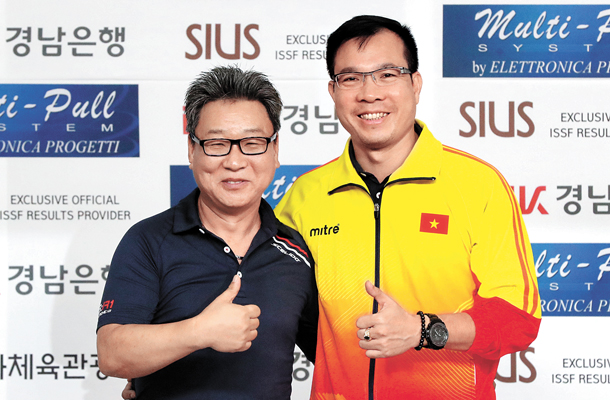 Football coach Park Hang-seo may be the first name that comes to mind when thinking about Korean sports leaders in Vietnam. But before Park started leading the U-23 Vietnamese football team to success, another Korean, Park Chung-gun, was helping transform the Southeast Asian country’s shooting program.

Long before Park Hang-seo started, Park Chung-gun was the first Korean coach to experience fame in Vietnam. He led Hoang, a military officer at the time, to win Vietnam’s first-ever Olympic gold medal at the 2016 Rio Olympics. At the Olympics, Hoang won gold in the men’s 10-meter air pistol, setting a new Olympic record of 202.5 points, and won silver in men’s 50-meter pistol.

Hoang earned more than 500 million won ($448,260) in prize money from the Vietnamese government and advertising contracts.

“When we returned from the Rio Olympics, thousands of people were there to welcome us,” Park said.

Park, who was appointed as the head coach of the Vietnamese shooting team in 2014, has led the country’s young team to success against major shooting powers over the past four years. Prior to his arrival in Vietnam, Park had been coaching Korea’s second-string national team from 1993 to 2005. When he started coaching the North Gyeongsang provincial team, he participated in joint training with the Vietnamese shooting team. As the Vietnamese team improved significantly thanks to Park’s training, Vietnam hired him as the national shooting coach.

Just like how the football coach taught his Vietnamese players to take pride in playing for their country, Park, too, taught his players confidence.

“I gave up everything to come to Vietnam,” Park said. “I’m going to teach them the world’s best techniques and give them the best equipment.”

Currently, Vietnam only has about 200 sports shooters. Since the country still doesn’t have a proper shooting facility with electronic targets, coach Park Chung-gun brought his players to Korea and trained them.

“Our coach trains us a lot,” Hoang said. “Just like coach Park Hang-seo in football, our coach also teaches us new styles. He motivates us by telling us to set our goals high. The Korean coaches changed Vietnam.”

Although Park Chung-gun already led the Vietnamese shooting team to success at the Rio Olympics, he’s just getting started. Park has now set his sights on winning Vietnam’s first gold at the ISSF World Championship in Changwon, which started last week.

Hoang finished 30th in the men’s 50-meter pistol on Tuesday and will compete for the gold in men’s 10-meter air pistol tomorrow.

“For the first time in Vietnam [shooting] history, our goal is to medal at the ISSF World Championships,” Park said. “Then we want a good result at the 2020 Tokyo Olympics.”