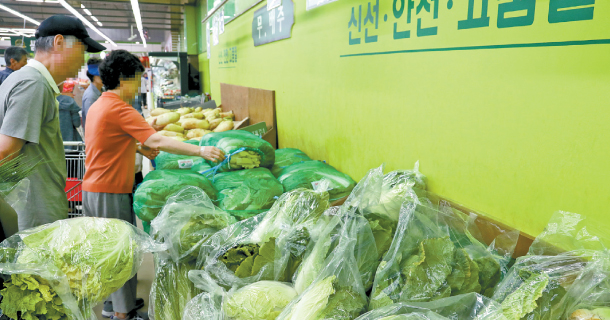 Shoppers at a local supermarket in Seoul on Tuesday. The price of agricultural products continue to increase, causing serious concerns ahead of the Chuseok harvest festival. [YONHAP]

Consumer prices may have remained stable in Korea in August, but soaring agricultural product prices raise serious concerns with the Chuseok harvest festival just around the corner. 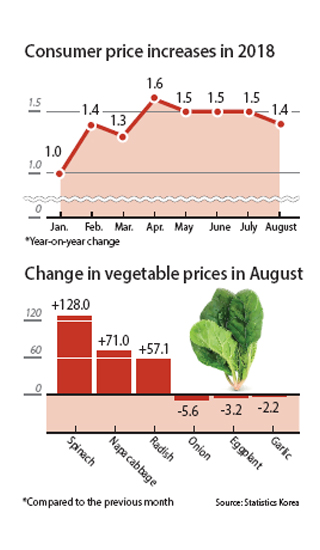 According to Statistics Korea on Tuesday, Korea’s consumer price index gained 1.4 percent in the month of August compared to a year ago, maintaining a stable increase in the one-percent range for the 11th straight month.

Consumer price increases have been kept at or below 1.5 percent so far this year except in April, when average prices rose 1.6 percent year on year.

While overall consumer prices remained stable, those of agricultural goods soared in August compared to last year, as well as from the previous month.

Data from the statistics agency indicated that the overall price of agricultural goods - including vegetables, seafood and livestock products - rose 3.5 percent year on year and 7.5 percent month on month.

“It was the heat wave that led to the increase in vegetable prices, forcing up the overall price of agricultural goods tremendously,” said Kim Yun-sung, director at the price statistics division of Statistics Korea, on Tuesday. “Grains and vegetables, as well as seafood prices, led the way.”

Along with the heat wave, local farms were battered by the unexpectedly heavy rain that swept the country late August.

The data shows that the price of spinach jumped by 128 percent from July and 22 percent from last year. That of radish rose 57.1 percent month on month and 24.4 percent year on year.

The prices of vegetables shot up, rising 30 percent from July, the most drastic month-to-month increase since September 2016.

The price of fish went up 6.2 percent compared to the previous year.

The price of some agricultural goods, however, fell, although the decreases are not as dramatic as the increases witnessed for other products.

For instance, the price of pork tumbled 3.9 percent on year. The value of onions fell 26.8 percent compared to last year.

“This is because prices of these agricultural goods last year were so high that they had the effect of bringing down the relative price of goods this year,” explained another official from the statistics agency.

After an unprecedented heat wave forced Koreans to run their air conditioners for longer than they normally would this summer, the Ministry of Trade, Industry and Energy decided to temporarily adjust the pricing system for July and August to stop households from being hit with exceptionally high bills.

The overall utility price, which encompasses the prices of electricity, water and gas, fell 8.9 percent compared to last year as a result, Kim explained.

Still, prices of agricultural products are likely to further increase as the Chuseok harvest festival is around the corner, putting the burden on the public as they prepare for the holiday.

Although the government recently rolled out measures to try and control rising costs, including releasing emergency supplies of popular vegetables, there is little sign of prices stabilizing.

Chuseok falls at the end of this month.