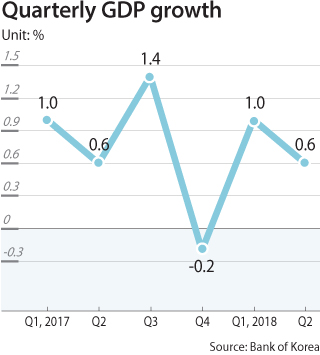 The Bank of Korea (BOK) said Tuesday that the country’s gross domestic product (GDP) expanded 0.6 percent between April and June compared to the previous quarter. The growth rate in the first quarter was 1 percent.

Compared to the same quarter in 2017, the economy grew 2.8 percent, a result that dims prospects for meeting the central bank’s growth forecast of 2.9 percent for the entire year.

Since the first quarter also saw growth of 2.8 percent compared to a year earlier, Korea will need quarterly growth of at least 0.91 percent for both of the remaining two quarters to fulfill the annual projection.

Construction investment dropped 2.1 percent due to a slowdown in residential construction and civil engineering projects.

“Construction and plant investment did well last year and the year before, but now the trend has been adjusted,” said Shin Seung-cheol, a director of the BOK’s national accounts division.

“There has been a reduction in investment for the building of semiconductor and LCD panel production lines,” Shin said, “The reason for the cut is that existing lines can cover [demand] and growing imports of LCDs from China.”

Consumption in the private sector also remained stagnant, rising only 0.3 percent compared to the previous quarter.

Prospects for consumption in the future are far from sanguine with consumer sentiment in August hitting a 17-month low.

Government spending edged up 0.3 percent quarter on quarter, the lowest growth since the first quarter of 2015.

The BOK expected extra government spending to bolster that figure in the coming months.

While the Bank of Korea said that the country is still on the right track for steady growth, analysts believe it will lower its projection for 2018 growth in October.

Adding to the worries, the gross national income (GNI), an index for the total income of the country’s residents and businesses, went down 1 percent on quarter.

“The value of imports went up, and it is primarily because of higher oil and natural gas prices,” he said.

Still, the central bank maintained its projection that Korea’s GNI per capita will reach $30,000 by the end of this year.

“I am sure that the GNI figure will come to the $30,000 level, unless the currency rate suddenly surges,” the director noted.

The $30,000 mark has long been regarded by Korean officials as the threshold to enter the ranks of truly developed economies.