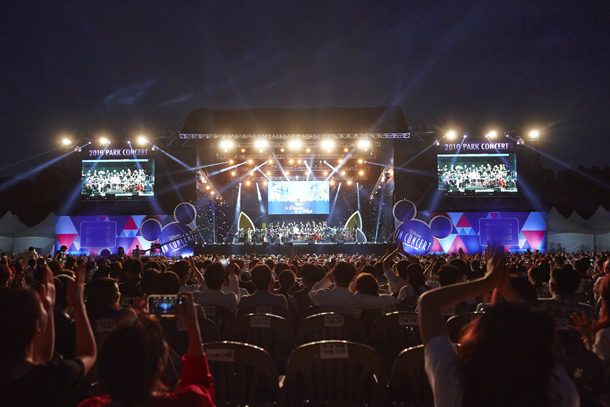 At Olympic Park in southern Seoul, songs from hit Disney movies will fill the air this weekend. [STUDIO BOB]

Sept. 8
: The only outdoor Disney concert in Korea will feature the songs from hit movies like “The Little Mermaid,” “Lion King,” “Beauty and the Beast” and “Frozen.”

The show will be performed by the KBS Symphony Orchestra conducted by Yun Hyun-Jin.

Oct. 7: Famed Croatian pianist Maksim Mrvica is returning to Korea for the first time in two years. Since 2004, the pianist has performed in Korea multiple times. The highlight of this show will be songs from his ninth album, which was released on June 1.

Sept. 9: Renowned pianist Kim Sun-wook, the winner of the prestigious Leeds International Piano Competition in 2006, will make his return to the Seoul Arts Center. This is the final recital in his nationwide tour, which began last August. The program consists of four pieces, Mozart’s “Piano Sonata No. 9 in D Major,” Beethoven’s “Piano Sonata No. 17 in D minor,” Debussy’s “Suite Bergamasque” and Brahms’ “Variations and Fugue on a Theme by Handel.”

Sept. 12: Star pianist Cho Seong-jin and veteran violinist Chung Kyung-wha will collaborate to celebrate the 30th anniversary of the Seoul Arts Center. Since winning the renowned International Chopin Piano Competition in 2015, Cho has held a handful of concerts in Korea, and they have sold out as fast as K-pop concerts. The upcoming show with master violinist Chung Kyung-wha is a must-see for classical music aficionados.