Next ‘Produce’ group to debut in October

Next ‘Produce’ group to debut in October 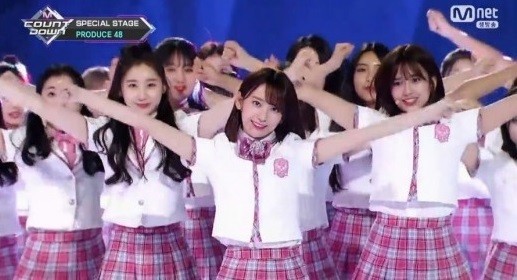 IZONE, a K-pop group born from the Mnet audition program “Produce 48,” will debut on Oct. 29, the broadcaster announced on Tuesday.

“Produce 48” is the third season of Mnet’s phenomenally popular “Produce” series. The first two seasons produced chart-topping girl and boy groups, and this season, which aired from June 15 to Aug. 31, switched things up by including trainees from Korea and Japan.

Fifty-seven contestants from Korea and 39 from Japan vied for 12 spots in IZONE. The Japanese contestants are members of the Tokyo-based idol group AKB48 or its offshoots, hence the show’s title “Produce 48.”

The top 12 contestants that will be part of the new music group were announced on the season finale last Friday. Jang Won-young from Starship Entertainment won the most votes, 338,366, which means she will take center stage in the group’s performances.

IZONE will be active for two and a half years, much longer than any group that formed out of the “Produce” series. The first season’s project, I.O.I, was only active for a year, and the second season’s group, the boy band Wanna One, got a year and a half.

Unlike previous groups, the group from this season is expected to be active in both Korea and Japan.