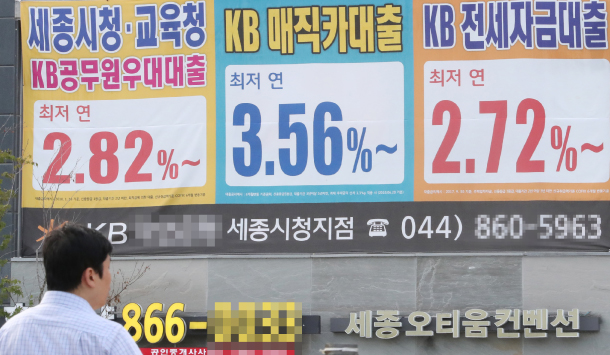 Fresh mortgages from KB Kookmin, Shinhan, Woori, KEB Hana and NH Nonghyup last month amounted to 2.88 trillion won ($2.59 billion). This is the biggest monthly increase since November 2016, when 3.16 trillion won in new mortgages were borrowed. The total amount of new mortgage loans taken out from the commercial banks was 392.3 trillion won.

With apartment prices in Seoul showing no signs of cooling down, those who remained on the sidelines have started to jump in. The situation resembles the overheated market of the mid-2000s during the Roh Moo-hyun administration.

The government and the ruling party said that the housing supply needs to be increased to cool the overheated market.

“We’re looking into plans to increase the number of housing units for real buyers, as we are now able to distinguish them from speculative investors,” said Blue House policy director Jang Ha-sung during an interview with JTBC on Monday. “We are considering increasing the supply in the metropolitan area, including Seoul, for actual buyers such as newlyweds and middle and lower-income households.”

Jang, however, noted that the new apartment supply plan will be different from past administrations, which developed large-scale apartment complex projects that attracted speculative investment. He said these new housing units will be built on a small scale in areas that have room for development and are conveniently located.

“We’re in the process of working with local governments,” Jang said.

Government officials have floated the idea of announcing details on the housing plan before the Chuseok holiday, which begins on Sept. 23.

Democratic Party (DP) Chairman Lee Hae-chan said on Monday that it is important for the government to announce its housing construction plans soon to stabilize the market.

“While [the government] is considering various measures, including a [rollback of] tax [benefits], what’s more important is significantly increasing the supply [of apartments],” Lee said.

Until recently, the government has been skeptical over whether increasing the number of apartments in Seoul would stabilize the market, as suggested by some market experts.

Land Minister Kim Hyun-mee on Friday said Korea has a sufficient amount of housing to last until 2022.

“Yet because of such concerns, we announced that we will supply an additional 300,000 units,” Kim said. The government announced the plans to supply the 300,000 units late last month. The government also added Dongjak, Dongdaemun, Jongno and Jung districts in Seoul to the list of speculative districts, which already had 11 districts listed. The speculative designation applies numerous restrictions to real estate, including higher sales taxes and restrictions on loans.

Last year, the government announced that it would supply 263,000 units on average in the greater Seoul area between 2018 and 2022. In Seoul alone, the government was planning on adding an average of 72,000 units annually until 2022.