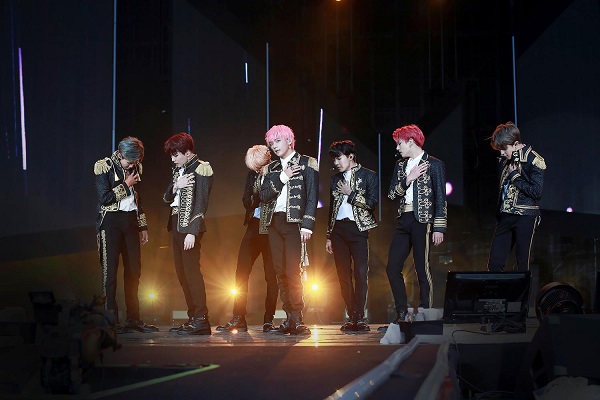 For 20 players on the Korean men’s football team in the Asian Games, victory over Japan on Sept. 1 meant more than winning gold. They also won automatic exemptions from the two-year mandatory military service almost all Korean men dread and look back on with bitter regret.

The next day, K-pop sensation BTS topped the Billboard 200 Albums chart for the second time in three months, which had the boy band’s fans - who happen to be known as ARMY - wondering why a K-pop act that brings just as much glory to the country doesn’t get the same break.

Under domestic law, every able-bodied man between the ages of 18 and 35 are obligated to complete about two years of military service. Refusal to comply is punishable by 18 months in prison, though the government provides options for alternative service in a few exceptional cases, such as men deemed unfit for active duty, such as when they’re too skinny or too obese.

Some athletes and artists have a lawful way out.

In sports, those who win a gold, silver or bronze medal in the Olympics, or a gold medal in the Asian Games, are granted exemption from military service. The same goes for artists who win the first or second spot in an international classical music or dance contest chosen by the Military Manpower Administration or the highest honor in a number of national contests in traditional Korean music, dance, art or acting.

Men who fall into these categories only go through four weeks of basic military training, after which they are required to work 34 months in their respective field, which means they can continue to pursue their careers without interruption.

K-pop stars get no such consideration.

BTS’s domination of the Billboard chart Sunday has ignited a national debate on the country’s criteria for military exemption and whether the system is even defendable to begin with. A slew of petitions supporting the boy band’s exemption from military service were uploaded to the Blue House website.

“The BTS effect induces people all over the world to learn where Korea is located and the language they use, and moreover learn about the country and visit it,” wrote one petitioner on Tuesday. “Koreans who travel abroad, either politicians or ordinary people, are treated well when they ask locals, ‘Do you know Psy? Do you know BTS?’ Asians were once discriminated against, but BTS has changed the way people in South America, Europe and other [countries] see us.”

Ki Chan-soo, commissioner of the Military Manpower Administration, said Monday it was “time to review” Korea’s military exemption system, admitting there is a lack of social consensus on current rules. But Ki alluded to the possibility of narrowing down the cases through which men could be exempted, instead of widening them, saying the military suffered from a lack of manpower.

Prime Minister Lee Nak-yon said Tuesday during a cabinet meeting at the Seoul Government Complex that the Military Manpower Administration should devise a “reasonable” way to improve the current exemption system in light of the recent controversy, but underscored that any revisions won’t be retroactive.

A total of 42 Korean athletes who earned gold in the Jakarta Palembang Asian Games this month will be exempted from military service, including football player Son Heung-min, 26, who plays for Tottenham Hotspur.

Korea’s military exemption policy dates back to 1973 in the Park Chung Hee dictatorship. His government chose to grant the privilege to a few select people who, it thought, improved Korea’s prestige on the international stage. The first person to get it was Yang Jung-mo, who won Korea’s first Olympic gold in featherweight wrestling at the 1976 Summer Olympics in Montreal, Canada.

When Seoul hosted the 1988 Summer Olympic Games during the Chun Doo Hwan government, the military announced that it would grant exemptions to athletes who came in first, second or third place in either the Olympics or Asian Games.

The current exemption system for athletes was fixed in 1990.