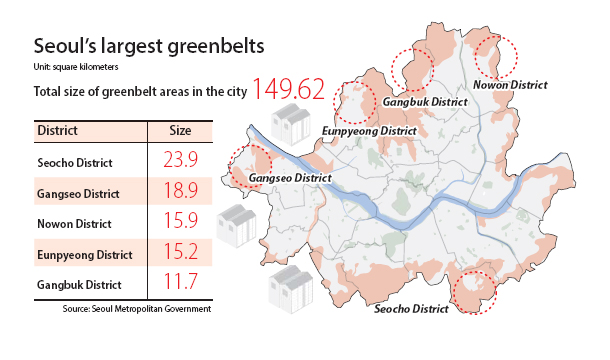 The Korean government is mulling the option of developing regions in Seoul designated as greenbelt areas to increase apartment supply in the city.

According to local media reports in Korea, the Ministry of Land, Transport and Infrastructure is looking into securing land in Seoul that could be developed into residential areas. Options on the table for the Land Ministry includes greenbelt areas with relatively less conservation value compared to other areas as well as abandoned land in the city.

Greenbelt zones are protected areas of land where building is not permitted to protect the environment.

Lawmakers and top officials, including ruling Democratic Party Chairman Lee Hae-chan and Blue House policy chief Jang Ha-sung, have said that the government wants to significantly increase the supply of apartments in Seoul. The stance indicates an about-face in the government’s real estate policy.

As recently as last week, top officials, including Land Minister Kim Hyun-mee, said that the supply of housing in Korea is sufficient. Up until now, government measures focused on tight control over speculation on existing apartments.

Experts think increasing apartment supply rather than imposing one draconian measure after another may be a better option for the government.

“Giving a signal to the market that housing supply in Seoul will expand could stabilize market sentiment,” said Kwon Dae-jung, a professor of real estate studies at Myongji University. “To resolve the issue of ever-rising housing prices, the government also needs to lift restrictions on reconstruction and redevelopment.”

Greenbelt areas in Seoul cover about 149.6 square kilometers (36,967 acres), including a 23.88-square-kilometer zone in Seocho District, southern Seoul. Market analysts think greenbelt areas near Gangnam District, southern Seoul, are the most realistic options for the government, including the ones in Seocho and Songpa Districts. Songpa is home to a 2.64-square-kilometer greenbelt zone.

The government of Seoul, however, is taking a cautious stance on overturning the conservation areas for land development and wants to first develop abandoned land in the city.

An official from the Seoul government said the city considers greenbelt areas as the “last bastion” that must be protected and kept as a last resort, adding that the city would cooperate closely with the central government if it makes an official request.

While it’s unclear where the government will go next with its attempt to curb the housing market from further gathering steam, apartment prices in the Gangnam region - which refers to the four affluent districts of Gangnam, Seocho, Songpa and Gangdong - continue to rise, an indication that past measures have had little effect in cooling down the market.

According to Budongsan 114, a real-estate information provider, the average price of apartments in Seoul rose by 0.57 percent in the last week of August compared to the previous week.

Prices in other districts have risen by more than 10 percent in less than a year. The price per 3.3 square meters for some apartments in the region has reached as high as 100 million won, some local analysts say.