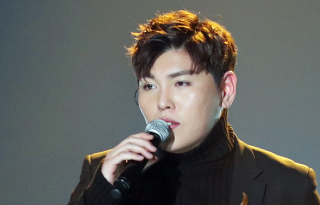 Singer Han Dong-geun will take an indefinite leave from music after being charged with drunken driving, his agency said Wednesday.

Han was caught driving while drunk near Bangbae-dong in southern Seoul on Aug. 30. At the time of the accident, police said that Han’s blood alcohol content level was 0.103 percent, which was high enough to suspend his driver’s license.

Han was said to have immediately acknowledged his wrongdoing and cooperated with the police during the investigation. Han is scheduled to appear in front of the police for further investigation on Wednesday.

“Han Dong-geun deeply regrets his actions and will stop all work he had planned to reflect upon his mistakes. He will also faithfully cooperate with the police in any further investigations,” Pledis Entertainment announced. “We feel responsibility, having not managed our artist properly, and will make sure that all of our artists attend a regular seminar that will help prevent them from driving while drunk.”

Han debuted in the third season of MBC’s audition program “Star Audition,” where he came in first place. Since then, he has released many hit singles such as “Making a New Ending for This Story” (2014).