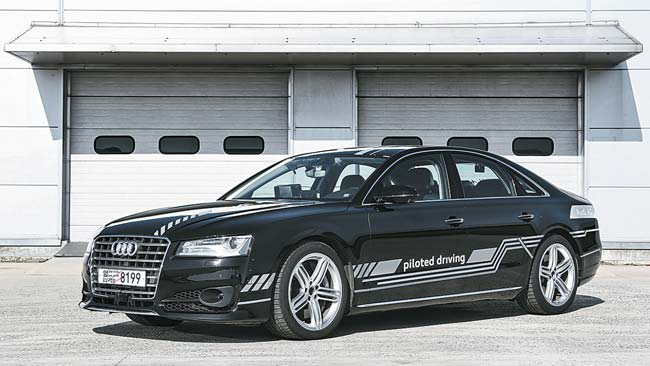 Audi Korea said Wednesday that it is set to run test drives of its self-driving A8 sedan on local roads.

The full-size sedan is the first self-driving import vehicle to receive a temporary license to run on Korean roads from the Ministry of Land, Infrastructure and Transport.

Audi obtained the license in March and has spent the last few months collecting data about Korean roads and testing its self-driving features ahead of beginning official test drives, according to the Korean unit of the German carmaker.

As preparations are now complete, the carmaker said it will level up its self-driving technology through continuous testing at Korea’s main testing ground, dubbed K-City, located in Hwaseong, Gyeonggi, as well as on local roads.

Audi’s A8 is the world’s first commercial car with Level 3 autonomous driving capabilities. While an autonomous car’s driving level is categorized from zero to five, with five being a fully autonomous car, Level 3 indicates drivers will no longer be in charge of controlling the car, though they still need to be prepared to intervene if necessary.

At the core of the car’s Level 3 driving system is what Audi calls the Audi AI Traffic Jam Pilot.

The system enables drivers to take their hands off the steering wheel on highways as it manages starting, accelerating, steering and braking the car, according to Audi. However, the system currently only works in an environment where carriageways are separated by a physical barrier and cars only move at speeds of up to 60 kilometers (37 miles) per hour.

The car is also equipped with a zFAS processor, Audi’s central driver assistance controller. The essential brain of the autonomous car collects images of objects detected around the vehicle in real time.

“We are happy to be able to contribute to the development and commercialization of self-driving technology in Korea, a country focused on establishing the infrastructure for self-driving,” said Cedric Journel, managing director of Audi Korea.

Audi premiered its A8 sedan at the Audi Summit in July last year in Spain. Since then, the company has been running tests in Europe to fully commercialize the Level 3 autonomous driving technology.

As of July this year, 47 self-driving vehicles have received temporary permits from the Transport Ministry to be tested on Korean roads. Hyundai Motor runs 16 test vehicles, Samsung Electronics runs three and Kia Motors and KT run two each.