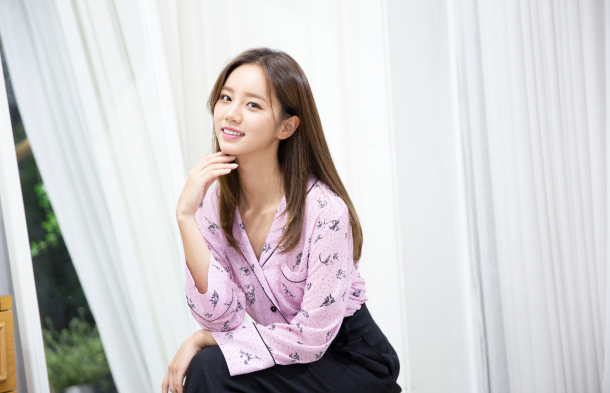 Singer-actor Hyeri from Girls’ Day makes her silver screen debut in the period fantasy movie “Monstrum,” which will open in cinemas on Wednesday. [LOTTE ENTERTAINMENT]

Singer Hyeri from Girls’ Day has proven that she can pull off cutesy performances on stage and also act on TV in tvN’s hit television series “Reply 1988” (2015-16). The retro drama scored a nearly 19 percent viewership rate, and played a major role in propelling the 25-year-old singer into the acting business.

The period film, Lotte Entertainment’s main offering for the upcoming Chuseok harvest holiday later this month - one of the biggest seasons for moviegoing throughout the year - is competing against other distributors’ tent-pole flicks, including CJ Entertainment’s “The Negotiation” and Next Entertainment World’s “The Great Battle.”

“I was so happy and grateful when I heard that my debut movie will hit theaters in time for Chuseok,” said Hyeri excitingly during an interview held in central Seoul on Tuesday, describing the autumn harvest holiday as the time that people want to go watch “great movies.”

“Though I felt pressure taking part in a film for the first time, my will to challenge myself and perform well was a lot bigger.”

The first Korean creature feature to be set in the Joseon era, the movie, directed by Heo Jong-ho (who also directed 2015’s “The Advocate: A Missing Body”), tells the story of four brave people who fight a gigantic and mysterious creature that brutally and indiscriminately devours people.

The four people are the king’s loyal subject Yoon Gyeom (Kim Myung-min), his right-hand man Seong-han (Kim In-kwon), Yoon Gyeom’s fearless daughter Myeong (Hyeri) and a military officer (Choi Woo-sik). Together, they fight both the monster endangering the monarch as well as a faction that takes advantage of the situation to perturb the public with the clear intent to dethrone the king.

Hyeri plays a curious and audacious character who does not hesitate to stand at the forefront of what could be a lethal battle against the unknown monster. She willingly touches dead bodies to analyze the causes of their deaths, and adeptly shoots arrows in desperate situations. With her medical knowledge and dexterity in archery, Gyeom proves herself to be even more useful at times than others on the team trying to find the monster, which infects people with skin-rotting diseases.

“I’ve always had a fantasy of being in a period movie, but never imagined it coming true,” said Hyeri. In her fantasy, she probably imagined being costumed in fancy traditional dress, an essential requirement for charming women in most period flicks. In fact, Hyeri’s character is a not-particularly clean young woman with dirt marks showing on her skin. Hyeri said she does not care about the character’s filthy look one bit.

“Myeong is a fearless girl, not a noble lady from the upper class,” she said. “I thought it would be natural to make the character look like the kind of a person whom you’d believe could do anything. That’s part of the reason I fell for this character, and I think her natural look is what makes her more beautiful.

As it was her first movie, the working process of “Monstrum” was not so familiar. 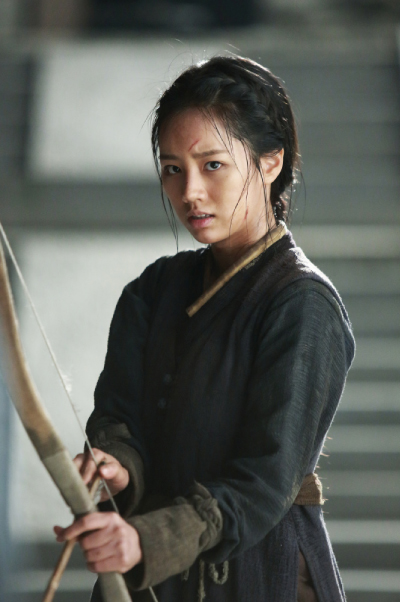 Hyeri plays the fearless Myeong, who fights against a monstrous creature that devours people in the Joseon Dynasty (1392-1910). [LOTTE ENTERTAINMENT]

“Since I didn’t have to shoot scenes every day, I thought the working process of a film would be more convenient and easier than working on a drama, which is shot on a very tight schedule,” she said. But there was a side effect to not being involved in shooting every day. “When I returned to a scene for the first time after several days, I couldn’t adjust quickly. And it wasn’t easy for me to hold onto the emotions as Myeong.”

Based on these challenges she struggled with in her first film, Hyeri learned “responsibility.”

“After working on this movie, I learned, as an actor, the importance of my role in delivering certain parts of the story and emotions to the audience. I believe it is an important part of my job as a celebrity to make people happy through what I do. Though there are many things that I want to try, the most important thing for me to achieve as of now is to satisfy the audience through my acting.”

Following the press preview of the movie on Monday, the film has received mixed reviews. Some described it as a typical period comedy with the addition of a monstrous creature, which is given only a short portion of the running time. Supporters praise the movie for its unprecedented CGI effects, calling it a milestone in fantasy flicks for the local cinema industry. Hyeri’s natural chemistry with veteran actors like Kim Myeong-min is impressive, they say.

Hyeri has mixed feelings at the end of the day. “I’m not completely satisfied of course,” she said. “It is never easy to be fully satisfied with what you have done. In fact, I don’t think that’s a necessary attitude because I believe it is more essential to think about what you lack and work on strengthening your weaknesses.”