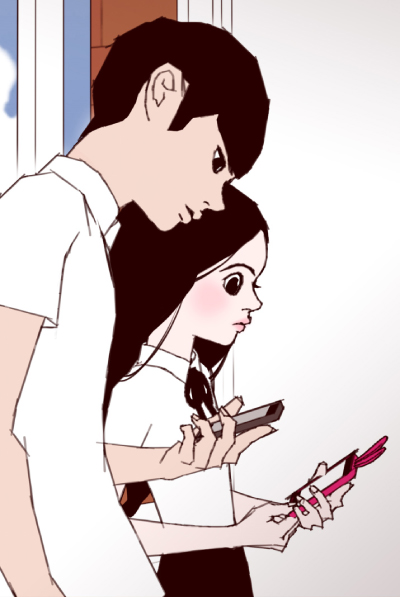 Netflix is adapting the popular web comic “Love Alarm.” The series is set to debut next year. [NETFLIX]

Netflix will begin production of a live-action adaptation of the popular Korean web comic “Love Alarm” this year with the aim of releasing the series next year, the global streaming giant said on Wednesday.

The series was supposed to debut this year, but production was delayed for internal reasons, according to Delight, Netflix’s PR agency in Korea.

The original “Love Alarm” by Chon Kye-young, who was also behind popular comics such as “Unplugged Boy” and “Audition,” explores how people’s lives are upended when a software company releases a mobile app that lets users know when someone within a 10-meter (30-foot) radius has romantic feelings for them.

Although the app initially draws hype and gains a huge following, the characters begin to struggle understanding each other’s true feelings and yearn for a natural romance that starts from that heart-palpitating moment of initial awkwardness.

“Love Alarm” was an instant hit when the first chapters were released in 2014. The web comic is still running and is currently in its seventh season. It has been recognized for its unique aesthetic and in-depth emotional expressions of characters.

The Netflix adaptation will be directed by Lee Na-jeong, who was behind the period drama “Snowy Road” (2015) and the KBS rom-com series “Fight For My Way” (2017). Seo Bo-ra and Lee A-yeon will join as writers.

Netflix is producing the series with Studio Dragon.