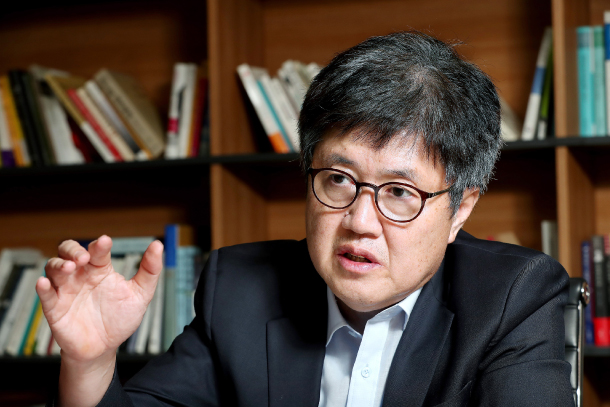 Last month, President Moon Jae-in dismissed Statistics Korea Commissioner Hwang Soo-kyeong. The Blue House then appointed Kang Shin-wook, a senior researcher at the Korea Institute for Health and Social Affairs, as her successor. Kang reported to the Blue House that the gap between Korea’s rich and poor is widening.

The opposition Liberty Korea Party is criticizing the move as a scheme to hide the failing results of the income-led growth policy by playing with statistics.

The Ministry of Finance set aside 15.94 billion won ($14.2 million) as the budget for next year’s household survey from Korea’s main statistics agency. Widespread speculation that the Blue House decision was prompted by a series of unfavorable reports produced by the agency, including the recent household survey report, is gaining support, as the new chief is reportedly working to come up with a new household survey.

Many have raised concerns that a frequent change in statistical standards would destroy the independence, neutrality and objectivity of the statistics agency.

The Blue House said it has “no intention to be influence statistics,” but not many are buying its line. The JoongAng Ilbo spoke with Yoo Gyeong-joon, 57, a former chief of Statistics Korea who reformed the statistical guidelines to create the current household income survey. Yoo, a dedicated researcher of labor economics, served as the commissioner from 2015 until July 2017.

Q. The commissioner of Statistics Korea was replaced after just 13 months. Is that common?

A. No. It’s not a position that can be changed so often, and there is no reason to make frequent replacements either. I have known Hwang for about 30 years. She majored in engineering, but she was involved in a lot of social protests in college. She became a journalist for a labor-oriented paper and then studied labor economics at Soongsil University and the State University of New York at Binghamton. Even after moving from the Korea Labor Institute to the Korea Development Institute, she was a dedicated researcher on the issues of labor and income distribution. She is a person of integrity and perseverance. She may not have the best feel for politics, but she was a very good fit as chief of Statistics Korea.

But the Blue House found a problem with the statistics. The problem was that the statistics failed to reflect the reality of its income-led growth policy.

That is totally not true. It is impossible to distort statistics. There are official sample designs, like the one that the newly appointed chief Kang said he would look into. The basic methods of sample designs cannot be changed, and even if a part is changed, it won’t change the basic trend [of the widening income gap between the rich and poor.] Of course, the widening income gap is a result of both the sluggish Korean economy and corporate restructuring, but we can’t deny that the minimum wage hike had a big influence.

How did the minimum wage increase influence income distribution?

The policy increases earnings for workers, but for job seekers it has become more difficult to find a job and for microenterprise operators it has become harder to increase profits. Moreover, the manufacturing industry started restructuring from 2016, and conflict between Korea and China over the deployment of the Terminal High Altitude Area Defense antimissile system didn’t help boost the economy. While the sluggish economy cut average incomes, the sudden raise to the minimum wage hit microenterprises hard. Unlike other developed countries, where the portion of self-employed people accounts for roughly 10 percent of the employed population, this portion is around 25 percent in Korea. There was not much research and consideration over this situation.

Hwang shed tears during her farewell ceremony and said, “I have strived to put independence and professionalism at the heart of Statistics Korea.” Why do you think she said that?

The Blue House expected the income distribution would improve since they’ve worked so hard to enforce income-led growth policies. But the figures showed otherwise. This led to the dismissal of Hong Jang-pyo, senior secretary for economic affairs, who was essentially the architect of the income-led growth policy. The Blue House also started questioning the sample design of the statistics agency. Hwang probably said there was no problem, considering that Hwang said she didn’t really listen to what people from above said.

Why did you change the sample design during your term?

As time went by, a lot of households didn’t answer our survey. Especially in places like the posh Apgujeong area in southern Seoul, where the rich people reside, they didn’t open up their doors to participate in surveys. So I decided to change the survey method and redesign the survey samples to better reflect the different regions, age and academic background of the head of a household, the type of residence and more. I also reduced the size of the sample from 8,500 households in 2016 to 5,500 in 2017. The samples were redesigned to better reflect the rapid increase in single-person households and societal aging. In 2018, Statistics Korea increased the sample size to 8,000 households to get more detailed survey results, but they increased the samples proportionately according to the existing sample design.

Are there any other reasons?

The core reason was that the previous sample design tended to reduce the amount of income disparity showed by statistics. The household income survey was done by door-to-door surveys, but people living in rich areas like Apgujeong were reluctant to participate.

The income survey wasn’t supposed to be released to the public.

Yes, it was planned to be that way. As the sample was redesigned, a direct comparison between the figures from 2016 and 2017 was impossible. But when income distribution improved temporarily in the fourth quarter, largely due to the Chuseok harvest holiday, the Blue House and the Ministry of Finance broke their promise and released the data to the press. Statistics Korea had to offer the data, which made the situation awkward. The agency kept on releasing quarterly income distribution data, and unlike their expectations, the figures kept on deteriorating.

So the new commissioner plans to review the sample design for the household income survey.

Kang says he will, but the results won’t be much different. He must have thought that the changed sample design caused the problem, but if the agency starts changing the sample designs again, nobody will believe the results. Statistics Korea knows the consequences.