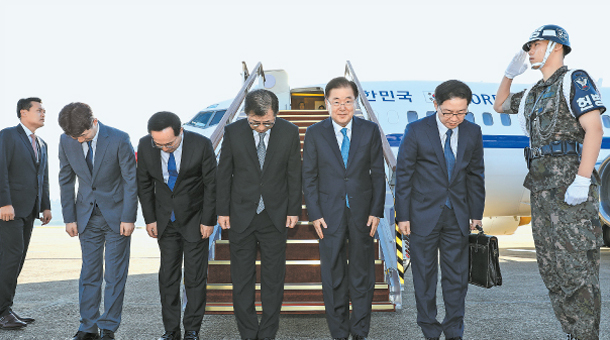 President Moon Jae-in’s envoys to North Korea bow before embarking on a day-long trip to Pyongyang Wednesday at Seoul Air Base in Seongnam, Gyeonggi. The five-member delegation, led by Chung Eui-yong, the president’s national security adviser, third from right, met with North Korean leader Kim Jong-un and delivered a letter from Moon. [YONHAP]

Moon Jae-in’s special envoy to North Korea met with North Korean leader Kim Jong-un Wednesday on a day-long visit to Pyongyang and delivered a letter from the South Korean president, according to the Blue House.

Chung Eui-yong, Moon’s national security adviser, embarked on a one-day trip to the North Korean capital as head of a five-member delegation that include the director of the National Intelligence Service (NIS), Suh Hoon, to finalize details of a third Moon-Kim summit and discuss ongoing denuclearization talks between Pyongyang and Washington.

The spokesman did not disclose any further information about the delegation’s meeting with the North Korean leader or about Moon’s letter to him, but said he would brief the press in detail the following day.

The Blue House said the delegation members would return to Seoul after an official dinner. Who attended the banquet was not known at press time.

The fact the delegation succeeded in meeting with Kim raised expectations that efforts by South Korea to bring North Korea and the United States closer to common ground might have worked, though details of any progress were not available as of press time.

The worst case scenario for the Blue House was if Chung returned home empty-handed without meeting Kim, which was the fate of U.S. Secretary of State Mike Pompeo in his third visit to Pyongyang in July.

That would have been an indication of the North’s deep discontentment with Seoul’s role in the denuclearization process.

Chung and four other delegation members left for Pyongyang Wednesday morning and landed in Pyongyang at 9 a.m.

Ri Son-gwon, chairman of the Committee for the Peaceful Reunification of the Country, which handles relations with the South, greeted the delegation at Sunan Airport and escorted them to the Koryo Hotel, where Kim Yong-chol, vice chairman of the North’s Workers’ Party, joined them.

The delegation held a first round of talks with the North Koreans around 10:30 a.m. but details of the meeting - including who took part - were not disclosed.

The Blue House said North Korean leader Kim did not attend a luncheon that followed the first round of talks.

Chung’s delegation team was expected to return home late Wednesday night with a fixed schedule for the third inter-Korean summit of this year in Pyongyang this month.

The delegation’s trip came as the Blue House had been trying to help Pyongyang and Washington find some common ground after reaching an impasse in talks over denuclearization.

The Moon administration was said to have been proposing a framework in which a formal end to the 1950-53 Korean War is followed by concrete measures by Pyongyang to wind down its nuclear arsenal.

It was also reported that Chung would urge Kim to make a verbal promise to come up with specific denuclearization steps, including a timetable, so that the United States could accept the North’s demand for declaring an end to the Korean War, which ended in an armistice, not a peace treaty, 65 years ago.

In the past few weeks, Pyongyang has made it clear that it wants Washington to agree to formally end the Korean War as a guarantee of its regime’s security, saying it has shown its good faith by suspending nuclear and missile tests since November and by demolishing its Punggye-ri nuclear test site.

Washington, on the other hand, demands Pyongyang take more concrete denuclearization steps such as handing over a complete list of its nuclear stockpile and related facilities before formally ending the war.

North Korea reiterated its demand for an end-of-war declaration on Wednesday, contending it could be easily done if there was “political will” among the countries involved in an essay on the website of the North’s Foreign Affairs Ministry.

The impasse prompted Trump to cancel a planned visit by Pompeo to Pyongyang last month.