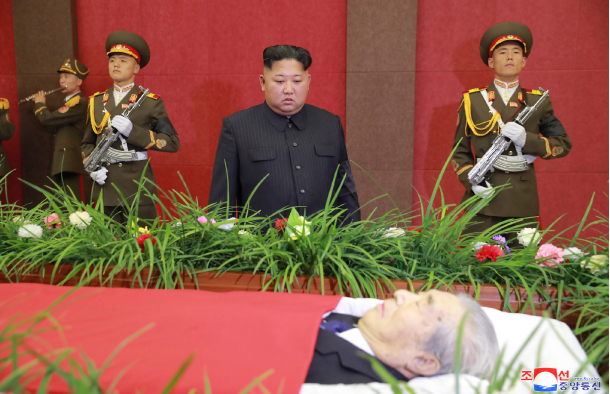 Kim Jong-un re-emerged in North Korean state media for the first time in over two weeks on Wednesday. His public appearance was timed just hours before a special envoy of South Korean President Moon Jae-in landed in Pyongyang to discuss inter-Korean relations and lay the groundwork for a third summit between the two countries’ leaders.

The state-run Korean Central News Agency (KCNA) reported Kim visiting the altar of Ju Kyu-chang, a former defense minister who was sanctioned by the U.S. Treasury Department in 2013 for his suspected role in the regime’s nuclear and missile development programs.

The KCNA did not give a precise date for Kim’s visit, but North Korean state media usually reports on the leader’s activities a day later for security reasons. That would mean the visit occurred on Tuesday.

Ju, a former alternate member of the Workers’ Party’s Central Committee and deputy of the Supreme People’s Assembly, the North’s rubber-stamp legislature, died on Monday from pancytopenia, a blood disease, according to another KCNA article on Tuesday. He was 89.

An official obituary from the state described him as an “elder revolutionary who made [a] distinguished contribution to the strengthening of the country’s defense capabilities,” the KCNA reported.

Kim laid a wreath at the mourning altar and paid tribute with “bitter sorrow of losing [a] precious revolutionary comrade,” according to an English version of the KCNA report on Wednesday. The report added that Kim met with Ju’s family members and consoled them.

The last time Kim appeared on North Korean state media was on July 21, when he made a so-called field guidance to a medical appliances factory in North Pyongan Province on the western side of the country.

For over two weeks afterward, Kim made no public appearances, a common precursor to major events. One possible explanation for his absence is a massive military parade that the North is set to hold on Sunday at Kim Il Sung Square in Pyongyang to celebrate the 70th anniversary of the country’s founding.

As Moon’s special envoy was preparing to arrive in Pyongyang on Wednesday, the North’s state newspaper, the Rodong Sinmun, disparaged the United States for trying to sabotage inter-Korean relations and accused the country of blocking progress in the Panmunjom Declaration signed between the leaders of both Koreas on April 27 during their first summit.

Uriminzokkiri, a North Korean government-run propaganda website that caters to audiences in South Korea, urged Seoul to distance itself from “outside forces” in an editorial on Wednesday, stressing that inter-Korean relations would only sour if the South relies on a third country, citing a “lesson from the past.”

The website pressed Seoul to carry out cross-border projects in the Panmunjom Declaration “without minding any others.”

Arirang-Meari, another North Korean propaganda website, called on Seoul on Wednesday to open an inter-Korean liaison office in the North Korean border town of Kaesong, as agreed to in the Panmunjom Declaration, saying the South must find the “principle” to brush off “undue pressure.”

The editorial did not explain the pressure’s source, but it appeared to be the United States.

An official at the Blue House in Seoul said last week that the South would “re-evaluate opening” the office after U.S. President Donald Trump called off a scheduled trip by Secretary of State Mike Pompeo to Pyongyang.