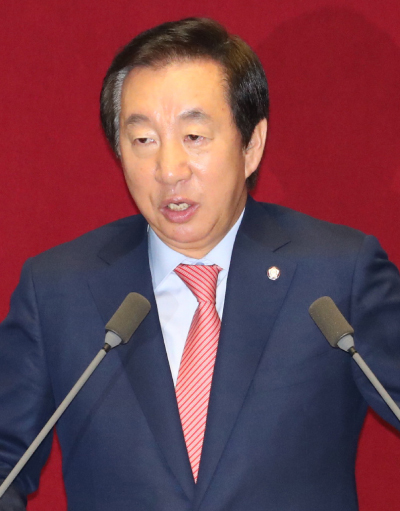 The floor leader of the main opposition party said Wednesday that now is not the time to push for parliamentary ratification of the April inter-Korean summit deal, citing a lack of North Korea’s sincerity toward denuclearization.

Kim Sung-tae of the Liberty Korea Party (LKP) delivered a speech at the National Assembly, which began its 100-day regular session Monday.

“We need to gauge North Korea’s sincerity toward denuclearization from a cool-headed perspective, not with an emotional approach,” Kim said. “In this context, I don’t see the parliamentary ratification of the April summit deal to be proper.”

Parliamentary speaker Moon Hee-sang earlier raised the need to ratify the so-called Panmunjom Declaration prior to President Moon’s trip to Pyongyang for the summit this month to support his peace initiative.

Kim of the LKP warned that what’s urgent is to dismantle North Korea’s nuclear weapons via international coordination, not to declare an end to the 1950-53 Korean War.

“I would like to stress that an original purpose of an inter-Korean summit is North Korea’s denuclearization,” he said.

Kim derisively called the policy a “red carpet leading to Venezuela,” pointing to the country mired in an economic crisis due to policy failures.

“Income-driven growth can be called growth spurred by excessive spending of taxpayers’ money,” he said. “The government should admit its policy failure and shift its economic policy.”