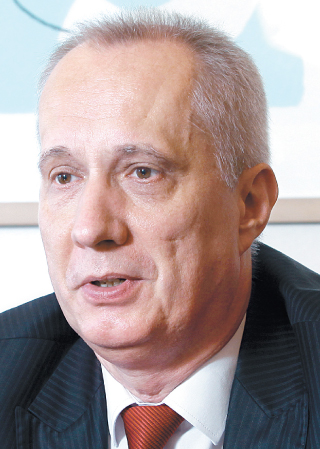 Belarus is open to Korean investors interested in blockchain, artificial intelligence and other “fourth industrial revolution” technologies, the deputy foreign minister from Minsk said on Tuesday during a visit to Seoul to promote bilateral relations.

“We have made groundbreaking state legislation regarding the IT sector,” Andrei Dapkiunas told the Korea JoongAng Daily in between meetings with the Joint Committee of Belarus and Korea. “We are the partner in Eastern Europe making innovative strides on blockchain, cryptocurrency, start-up development and software production.”

Dapkiunas is leading the Belarusian delegation for the joint committee’s fifth meeting. The committee convenes every two to three years in either Korea or Belarus.

“We have a high-tech park in Belarus, the biggest IT hub in the country,” he said. “Korea’s SK Hynix has a presence there, and we opened up the Belarus-Korea IT Cooperation Center in Minsk last year.”

“But there is so much more potential for reciprocal interest between Belarus and Korea,” he added, “and we feel that this potential is not fully realized. We believe that there is a significant potential for mutually beneficial cooperation in such fields as aerospace, artificial intelligence, biotechnologies, electric and self-driving vehicles, robotics and electronics, nanomaterials and digital economy.”

The deputy minister emphasized the Belarusian roots of software programs like Viber, the messaging app created by Belarusian and Israeli developers, and Maps.me, a Swiss-Belarusian map app that was later acquired by a Russian company.

“Intensification of bilateral cooperation in these areas will help both nations successfully respond to the challenges of the fourth industrial revolution,” he said.

Diplomatic ties between the two countries date back to 1992. Belarus first established an embassy in Seoul in 1997, and the Korean Embassy in Minsk opened in 2007.

Korean exports to Belarus include automobiles, electronics and equipment for construction, computers and telecommunications, according to the Korean Ministry of Foreign Affairs.

Belarusian exports to Korea include potash fertilizers, semiconductors, lasers and optical instruments, according to the Belarusian Embassy in Korea.

Korean exports to Belarus reached $28.46 million last year, and Belarusian exports to Korea reached $36.16 million, according to the Korean Ministry of Foreign Affairs.

Dapkiunas emphasized that people-to-people exchange is an essential prerequisite for successful business and trade relations.

“The people of the two countries are a little far away from each other geographically,” he said. “Greater cultural affinity to one another will be conducive for more bilateral economic activities.”

Having similar historical experiences may add to this affinity among people, he said.

“Like Korea, Belarus has a long history that includes serious sufferings and bitter wars,” Dapkiunas said. “Our countries successfully recovered from past historical tragedies, and we look optimistically to the future for peace and security in the international arena. For this reason, Belarus welcomed the inter-Korean summit and the efforts of the Republic of Korea and the DPRK aimed at strengthening peace and stability in the region.”

“We don’t believe in seeing wars as an experiment between nation states,” Dapkiunas said. “Dialogue is the only answer to peace, which will come with the denuclearization of North Korea.”