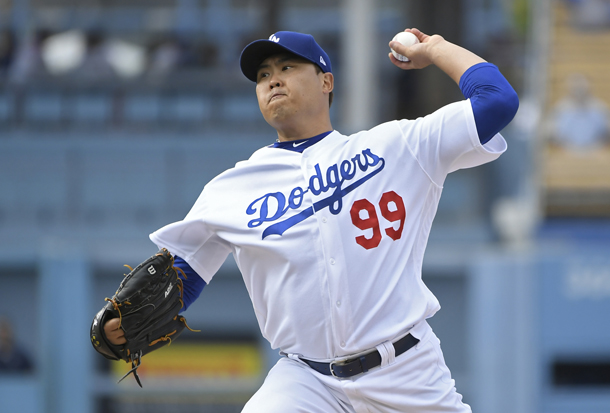 Ryu Hyun-jin of the Los Angeles Dodgers throws a pitch during a game against the New York Mets at Dodger Stadium on Wednesday. [AP/YONHAP]

The three earned runs tied for season-worst for Ryu, who missed three months of action beginning in May with a groin injury.

Ryu has also given up a career-worst 11 hits in two of his past three starts, though a few of the hits on this day were of soft variety.

Ryu had been 3-0 with a 1.69 ERA in five previous starts against the Mets.

And he seemed to be in for another fine outing against them. Ryu was perfect through the first three innings with four strikeouts but then the Mets touched him for three quick runs on four hits in the top of the fourth.

Ryu gave up a single and a double to the first two batters of the inning. Then Wilmer Flores bounced one off Ryu’s left foot and Amed Rosario sprinted home from third as the ball rolled into no-man’s land between first and second.

Two batters later, Michael Conforto hit a shallow fly to left field, and Jeff McNeill came home to make it 2-0. McNeill would have been out by a mile but catcher Yasmani Grandal had the ball pop out of his glove as he tagged the runner.

Austin Jackson followed it up with an RBI single to right and put the Mets up 3-0, though two of those runs were unearned for Ryu.

The Dodgers got a pair of runs back in the bottom fourth thanks to Max Muncy’s two-run blast. But the Mets responded with two runs of their own in the top fifth.

Ryu again allowed the first two batters to reach, and with one out, Rosario blooped one into shallow right for a 4-2 Mets lead.

Two batters later, Flores lifted one just over the head of shortstop Kike Hernandez, and Brandon Nimmo scored on the single to make it 5-2.

In the top of the sixth, Ryu got himself into a bases-loaded jam after three singles but induced an inning-ending double play off the bat of opposing pitcher, Zack Wheeler.

Wheeler was the last batter Ryu faced, as he was lifted for pinch hitter Chase Utley to begin the bottom sixth.

The Mets added two more in the seventh and went on to win 7-3.