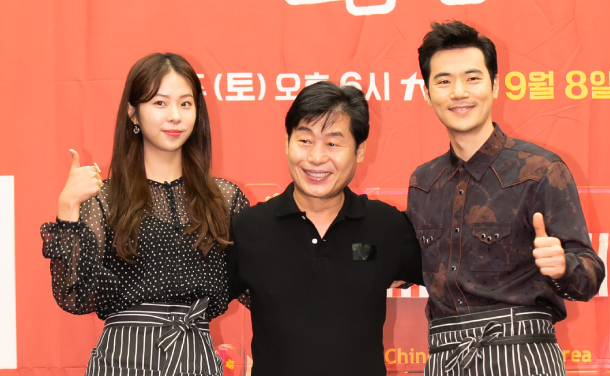 Like most places around the world with a Chinese diaspora, Chinese immigrants in Korea have adapted their native dishes to local tastes. One of the most popular is jjajangmyeon, noodles swimming in a black bean paste topped with minced pork and vegetables.

The dish is known in Chinese as zhajiangmian, and immigrants, mostly from China’s northeastern Shandong Province, brought the dish to Korea in the early 20th century. Over the years, the recipe was altered to fit the tastes of locals.

For one, the Korean jjajangmyeon uses chunjang, a fermented bean paste with caramel coloring added to make it darker than the Chinese variant. Chinese zhajiangmian, on the other hand, contains tianmianjiang, a sweet bean sauce that is thicker than chunjang, giving it more of a Bolognese texture.

So how would Chinese people respond to the dish’s soupier Korean cousin? It was one of the questions that inspired celebrity chef Lee Yeon-bok to head to China for the second season of tvN’s food show “4 Wheeled Restaurant” to serve Koreanized Chinese dishes to Chinese people. He was joined by actors Kim Kang-woo and Seo Eun-su and comedian Heo Kyeong-hwan as they tried to cook up Korean-Chinese dishes for the Chinese palate.

The first season of the show followed restauranteur Hong Suk-chun, best known for his chain of successful Thai restaurants in Seoul, as he attempted to sell his version of Thai food to locals in Thailand with the help of singer Lee Min-woo and actor Yeo Jin-goo.

“If season one was focused more on the management aspect because Hong, a restauranteur, was in charge, season two will focus on the cooking process with Lee, a professional chef, in charge” said Lee Woo-hyeong, the show’s producer, at a press event at the Stanford Hotel in western Seoul on Wednesday ahead of season two’s premiere on Saturday.

In the second season, the team tours Shandong, the birthplace of Chinese-Korean cuisine, in a food truck. For actors Kim and Seo, it was their first time on a variety show. Under the supervision of chef Lee, the crew prepared a variety of Koreanized Chinese dishes, including jjambbong, a spicy red noodle soup with generous helpings of seafood, as well as the classic fried shrimp and sweet-and-sour pork.

Lee’s professional experience with Chinese cuisine dates back to the 1980s when he worked at the Taiwanese embassy when South Korea had diplomatic ties with the Republic of China. Later, he opened his own Chinese restaurant, Moklan, in western Seoul.

He shot to fame on the JTBC cooking show “Please Take Care of My Refrigerator,” where he was known for his witty remarks and colorful cooking. This new experiment has excited the chef.

“Being a Chinese cuisine chef in Korea, I always wondered how Chinese people would accept our interpretation of their dishes,” he said. “To be honest, I was initially confident that we would find immediate success because everyone’s taste buds are generally the same regardless of race - people simply love delicious food - but it turns out that I was wrong. There were many occasions where I received unexpected reactions from customers during the shooting.”

“Chef Lee was always perfecting his recipes, hoping that the new ones would bring out a better reaction,” Kim said. “It was an honor to work with someone who has such talent and experience in cooking. I’ve learned a lot and also got to experience what it was like being a cook, a dream of mine that I think I would have pursued had I not become an actor.”