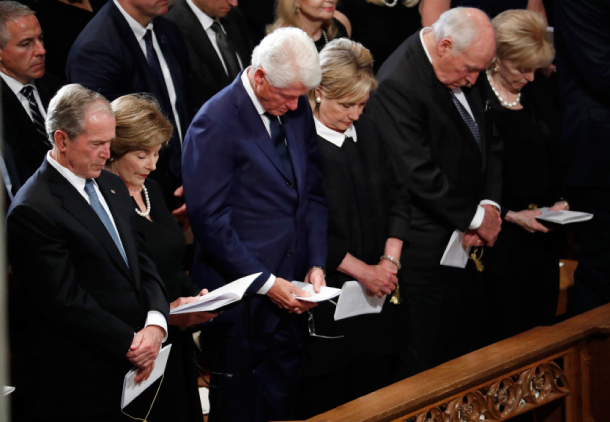 At the funeral for U.S. Sen. John McCain held at the Washington National Cathedral on Sept. 1, three former presidents and celebrities from all fields of life got together and showed bipartisan unity. The funeral was just as McCain had planned during the year since he was diagnosed with brain cancer. U.S. President Donald Trump was not invited.

They were in the same party but were on bad terms. However, McCain invited former presidents George W. Bush, who defeated him in the Republican primary, and Barack Obama, who defeated him in the presidential election. But McCain did not invite Trump, who had derided his past as a war hero. As if reflecting on McCain’s thoughts, Bush and Obama’s eulogies and McCain’s daughter Meghan’s memorial speech included respect for the deceased and criticism of Trump.

The news made my heart heavy. I was reminded of how Japanese pop star Namie Amuro was attacked by far-right protesters. The Okinawa native posted on her website in memory of Okinawa governor Takeshi Onaga, who died last month. When Onaga was alive, he promoted relocation of the U.S. airfield out of the prefecture. So Japanese rightists harshly criticized Amuro as “anti-Japanese” and “politically tone-deaf” for mourning Onaga.

The death of a politician is a political affair. The star of the show is the deceased and the attendees cherish and shed light on the politician. John McCain gave his final political message by excluding Trump from his funeral. He conveyed to his supporters and Americans that he would never acknowledge Trump. Even with the relationship between McCain and Trump, it is pity. As in Japan, where mourning for a politician from the same region is branded as “anti-Japanese,” the death of a politician caused another division.

Lee Hae-chan, seven-time lawmaker and new head of the ruling Democratic Party, believes that politics is dirty. But the politicians praise and compliment their enemies at funerals. It is called “funeral politics.” Former presidents Kim Young-sam and Kim Dae-jung were rivals their whole lives but reconciled before death. They sent a message to the people that anyone can hold hands. Former Prime Minister Kim Jong-pil died in June. The government awarded him the Mugunghwa medal, but President Moon Jae-in did not pay his condolences. It is a pity.