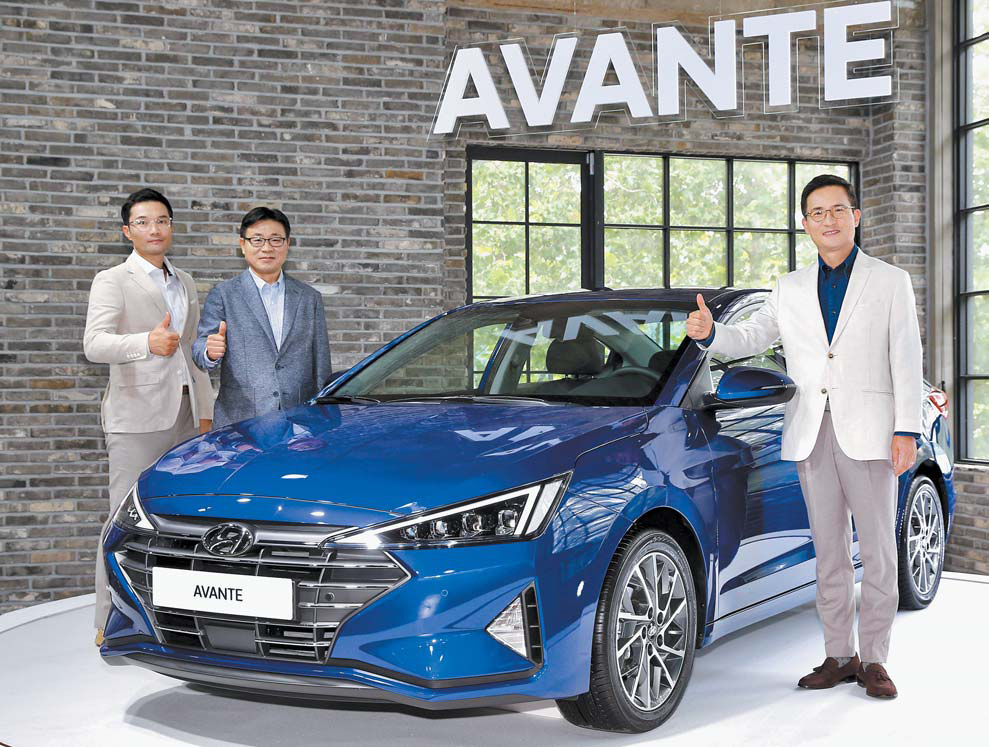 Hyundai Motor launched a facelifted version of its Avante sedan for the first time in three years in an attempt to boost the dwindling small sedan segment in Korea.

Lee Kwang-guk, executive vice president of the automaker, said Thursday that it aims to sell 120,000 units of the new Avante by the end of next year. Last year, Hyundai Motor sold some 84,000 units, making it the second most popular model within the Hyundai lineup after the Grandeur IG.

“Avante aims to be a reasonable daily car,” said Lee at the unveiling event in Namyangju, Gyeonggi, on Thursday. “The small sedan segment is largely affected by those in their 20s and 30s who are buying their first car. We put the focus on pragmatism and reasonability.”

The change to the exterior is immediately visible. The updated vehicle has a sharper, slimmer look compared to the previous model.

Hyundai Motor said the face was inspired by a gliding jet to give a strong yet stable look while the rear went for a sophisticated and sharp style to appeal to the younger generation.

The new model is available in 1.6-liter (0.42-gallon) gasoline, diesel and LPi engine. The petrol powered model has a fuel efficiency of 15.2 kilometers (9.4 miles) per liter, the highest among cars in the segment.

The diesel model has a fuel efficiency of 17.8 kilometers per hour.

In terms of safety functions, it has added safe exit assist, lane-keeping assistance, driver attention warning and rear cross-traffic collision warning systems. Hyundai Motor says it is the first time that a small sedan has been fitted with the safe exit assist function in Korea.

Voice recognition service Kakao I, which is used in navigation and artificial intelligence-based music search system SoundHound, has been also installed in the new model.