BMW’s import market dominance is going up in flames

BMW’s import market dominance is going up in flames 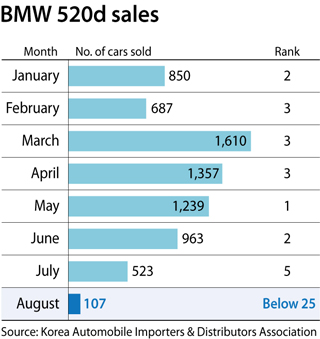 BMW, which has reigned supreme in Korea’s import car market for the past decade, is on the verge of losing its throne in the wake of the recent spate of engine fires.

The debacle has also prompted the Transport Ministry to tighten regulations on reporting defects and rolling out recalls here as well.

According to the Korea Automobile Importers & Distributors Association (Kaida) Thursday, sales of BMW vehicles in August nearly halved compared to the previous year.

Its best-selling 520d model, which is also at the center of the fires scandal, did not appear in the top 10 list, as well.

Audi took third place with less than 300 cars between the two German automakers. Audi sold a total of 2,098 vehicles, relying on only three sedan models.

A total of 107 units of the problematic 520d models were registered in August, a 79.5 percent drop year on year.

It used to be BMW Korea’s most reliable seller - in fact Korea was one of the top markets globally for the 520d.

Audi’s A6 sedan was the most popular import car model in August, selling 1,014 units. The Volkswagen Tiguan SUV came in second and Audi’s A3 sedan came in third.

In the aftermath of the BMW fire debacle, the ministry has come up with preventive legal measures to avoid similar incidents in the future.

The Transport Ministry said Thursday that it will impose penalties on carmakers that are found to have covered up defects and delayed recalls.

It said it will triple the recall delay penalty from the current 1 percent of the manufacturer’s revenue.

It also pledged to newly impose a 3 percent revenue penalty on automakers who try to conceal defects.

The ministry said it will expand the number of fines imposed on the automaker if it doesn’t submit detailed reports on defects on time.

The Transport Ministry has been claiming that BMW Korea’s either late or incomplete submission of the report to the ministry resulted in unnecessary damages that could have been avoided preemptively.

More than 40 BMW vehicles have caught fire in Korea this year, and the German premium automaker has issued a recall of more than 106,000 units to replace the exhaust gas recirculation (EGR) module last month.

Industry experts in Korea, however, have been raising issue with the root cause of the fire, saying that the EGR may not be the only cause.

“The latest measure is focused on expanding the responsibility of the manufacturer and enhancing consumer rights,” said the ministry in a written statement Thursday.

“It is to avoid similar incidents in the future,” the ministry added.