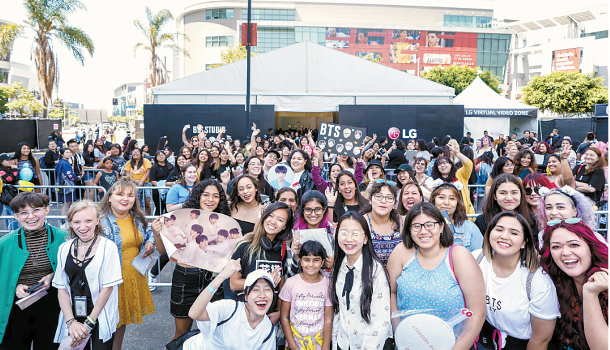 BTS fans cheer in front of an LG Electronics temporary showroom at the STAPLES Center in Los Angeles on Wednesday. [LG ELECTRONICS]

LG Electronics is exploiting BTS-mania in the United States to promote its latest smartphones and home appliances.

The company said it opened a temporary showroom on Wednesday at the STAPLES Center in Los Angeles, where BTS was playing as part of a world tour. Fans were able to view or even try a range of products including LG G7 ThinQ smartphones, OLED TVs, X-Boom high-end speakers, portable photo printers, Code Zero A9 wireless vacuum cleaners, Tromm Styler clothes steamers and PuriCare Air Purifiers.

A limited-edition LG G7 BTS was also unveiled. The smartphone has a BTS logo on its back and offers emoticons handwritten by each member of BTS. A dedicated app has yet-to-be-released photos of the BTS boys. And most exciting: The alarm on the phone can wake up the owner in the very voices of BTS members.

The temporary showroom was decorated with photos of BTS as well as videos that each of the seven members shot with LG G7 ThinQ smartphones, which they are brand ambassadors for. Clothes they wore in TV commercials for the brand were also on display.

In a photo and a video booth, fans could pose with virtual reality versions of the BTS members.

“BTS’s challenge and passion for the best in the world, world-recognized musical talent and their truthful attitude when it comes to dealing with fans coincide with the values LG Electronics pursues,” said Han Chang-hee, head of the global marketing center at LG Electronics. “We will continue promoting the true value of LG’s products and services.”

LG named BTS its global brand ambassadors for its flagship smartphone G7 earlier in April, paying “a hefty sum of money,” according to its spokesman.

Even though G7 sales haven’t been very robust, brand recognition of LG surged thanks to BTS. LG’s U.S. Twitter account gained tens of thousands of new followers and retweeting activity has exploded.

LG plans to open showrooms at each of the BTS World Tour locations in the United States - Oakland, Chicago and New York.