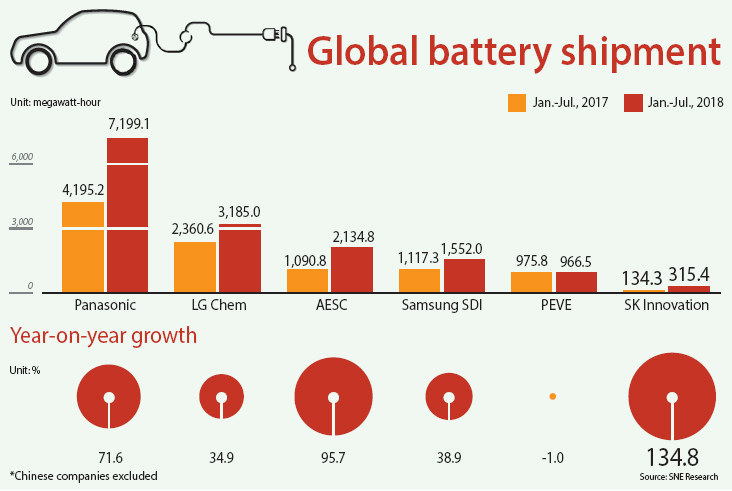 SK Innovation showed the highest year-on-year growth in shipments of electric car batteries during the first seven months among battery makers outside of China, the SK affiliate said Thursday.

According to data from market tracker SNE Research released Tuesday, SK Innovation shipped 315.4 megawatt-hours of batteries for electric cars through July, a whopping 134.8 percent increase compared to the previous year. The Korean company ranked sixth in terms of battery shipment size, up one place from last month, with Chinese competitors excluded from the list.

A big reason for looking at the list without Chinese competitors is because Korean battery makers have been struggling to enter the Chinese electric car battery market. The country refused to give subsidies to electric cars using Korean batteries.

While LG Chem and Samsung SDI are still bigger players in the battery-making world, SK Innovation outpaced them in terms of growth rate. LG Chem grew 34.9 percent year on year during the January to July period while Samsung SDI grew 38.9 percent.

The company also added that aggressive investment into facilities and research and development was a major driver. It has been expanding its production facilities from last year to meet surging demand for batteries.

Expansion of SK Innovation’s plant in Seosan, South Chungcheong, will be completed by the latter half of this year, advancing the plant’s production capacity to 4.7 gigawatt-hours per year.

As it is building two more plants in Hungary and China, the company’s total battery production capacity is expected to hit 20 gigawatt-hours by 2022, enough to power 670,000 cars that move on 30 kilowatt-hour batteries, according to the company.

“By the time new plants are constructed, economies of scale will raise the competency of our business,” a spokesperson from SK Innovation said.

The so-called NCM811 is considered cost effective because it uses less cobalt, a rare metal with a high price tag. However, no company has yet commercialized the technology to actually use the batteries in electric cars. Battery makers have been struggling to find a way to stabilize the battery while reducing cobalt.

While the Chinese market remains elusive for Korean battery makers, analyst Kang Dong-jin of HMC Investment Securities said the business environment in China will improve for Korean players as the Chinese government has started reducing subsidies with the goal of completely lifting them by 2020.

“There will be large demand for high-capacity batteries [that enable cars to move more than 300 kilometers (186 miles) per charge] in China and Korean players will likely have a chance at capturing that demand,” Kang said.