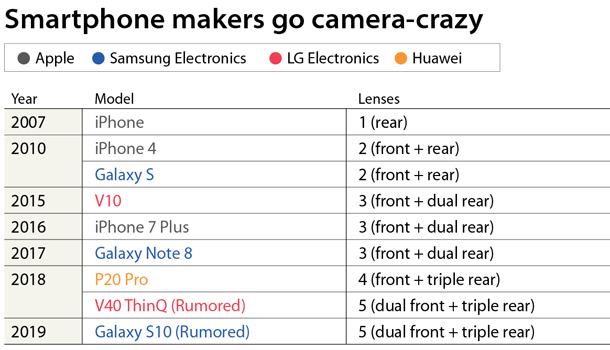 The S10 will feature two lenses on the front and three in the back, according to industry insiders. The actual specs are widely expected to be revealed in January.

If the prediction holds true, Samsung would be making a huge break from tradition. Previous Galaxy S models, save for the S9 Plus, which had three lenses, only came with one on the front and one in the back.

In March, Huawei generated buzz when it became the first in the world to showcase three rear lenses on its smartphones. Although Samsung had been focused on improving aperture and sensor quality in the S9, its Chinese competitor stole the thunder just by the sheer number of lenses.

“It would bother Samsung that Chinese makers would achieve a new feat when they have been traditionally known for providing products of decent quality at a low price,” said one analyst who requested anonymity.

But the trend of adding more lenses isn’t new. Manufacturers have been packing more glass into devices in the past few years because most phone cameras still lack optical zoom, and multiple lenses can offer different ranges of focus.

In 2015, LG Electronics became the first to flaunt a three-lens phone with the V10 (the rear had two lenses). Apple followed suit in 2016 with the iPhone 7 Plus, also with a dual rear camera. In October, LG is expected to set another record by launching the V40 ThinQ with five lenses.

Since last September, Samsung has also begun putting more lenses on its smartphones, starting with the Galaxy Note 8’s single-lens front and dual rear cameras. The Galaxy A8 and Galaxy S9 Plus, which came out this year, also have three lenses.

One of the biggest reasons driving phone makers to add more lenses is consumer preference for image quality. Since most phone cameras cannot zoom without sacrificing resolution, having multiple lenses with different focal lengths can solve the problem.

“We expect the demand for triple-lens rear cameras to continue rising since they offer attractive functions like optical zoom, ultra-wide angles and low-light photography,” a Samsung spokesman said after the release of second-quarter reports. “Our guess is that over 10 percent of all smartphones produced globally next year will adopt the triple-lens camera.”

Quality is also expected to rise in importance next year with the eagerly awaited arrival of 5G, the next-generation wireless network that promises speeds high enough to support augmented reality on smartphones.

Apple is already reportedly developing smartphone cameras that include augmented reality after its iPhone X presentation last year focused heavily on the technology.