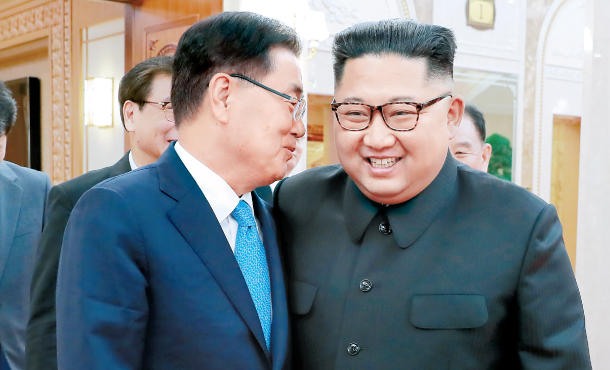 Chung, the Blue House national security adviser, held a press conference in Seoul after returning from a one-day trip to Pyongyang Wednesday, where he met with Kim and delivered a letter from Moon.

North Korean leader Kim, in turn, “reconfirmed his commitment to complete denuclearization,” Chung said, and expressed his wish to closely cooperate with South Korea and the United States on this issue.

Kim also expressed a strong desire “to settle 70 years of a history of hostility between North Korea and the United States within Trump’s first term as president and to improve North-U.S. relations and realize denuclearization,” Chung added.

South Korea’s five-member delegation during the day-long trip finalized details of the upcoming inter-Korean summit and discussed ongoing denuclearization talks between Pyongyang and Washington. Chung said the two sides decided to hold high-level negotiations to discuss logistics for the summit early next week in the inter-Korean truce village of Panmunjom.

They agreed that the purpose of the summit would be to review the implementation of the April 27 inter-Korean Panmunjom Declaration, as well its future direction, and “discuss practical ways to establish permanent peace and co-prosperity on the Korean Peninsula, especially through denuclearization.”

The two sides also pledged to continue working toward easing military tensions and to open an inter-Korean liaison office ahead of the third Moon-Kim summit.

Kim made clear his unwavering trust in U.S. President Donald Trump, said Chung during the press conference, and emphasized that although North-U.S. negotiations have faced “slight difficulties,” his trust in President Trump will be steadfast.

Chung said they did not discuss in detail U.S. Secretary of State Mike Pompeo’s fourth Pyongyang trip, which was supposed to have taken place last month but was abruptly canceled by Trump because of a lack of progress in denuclearization talks.

But Kim was said to have relayed that he had “never spoken negatively about President Trump to his advisers or anybody else.”

Kim, however, vented some “frustrations” at the lukewarm reception from the international community on his good-faith measures, such as the dismantling of the Punggye-ri nuclear test site, which he claimed made “nuclear tests permanently impossible,” and the Sohae missile engine test site in Tongchang-ri. He said that these were “substantive and meaningful” steps toward denuclearization.

The North Korean leader relayed to Chung a message for the United States, which was related to denuclearization, but the special envoy said he couldn’t reveal any more details.

Chung added, “North Korea revealed that if the pre-emptive measures it has taken are met with corresponding measures, it will continue to even more actively take measures toward its denuclearization.”

North Korea has been pushing the United States for a declaration to end the 1950-53 Korean War, which ended with an armistice agreement, not a peace treaty. Such a declaration could be considered a guarantee of sorts of its security. Washington has been demanding that Pyongyang take more concrete steps toward denuclearization, such as disclosing a complete list of its nuclear stockpile and related facilities. Washington has further maintained that there will be no sanctions relief for the North until it fully denuclearizes

Kim could have been suggesting that he would be willing to take more steps toward denuclearization in exchange for an end-of-war declaration.

The South Korean delegation, which included Suh Hoon, the director of the National Intelligence Service (NIS), was comprised of the same members who made a two-day trip in March to Pyongyang. They spent some 11 hours and 40 minutes in Pyongyang Wednesday.

In the morning, they held talks with Kim Yong-chol, the vice chairman of the North’s ruling Workers’ Party, and Ri Son-gwon, chairman of the Committee for the Peaceful Reunification of the Country, which handles relations with the South, in a conference room on the 38th floor of Pyongyang’s Koryo Hotel.

Later that morning, the South Korean delegation met with Kim Jong-un at the headquarters of North Korea’s Workers’ Party in Pyongyang. It had been unclear before their departure whether that meeting would take place.

Kim greeted Chung by clasping his hand with two hands, and the special envoy, in turn, relayed Moon’s letter. They met with Kim for over an hour.

After the meeting, Kim and Chung were photographed smiling and chatting closely, an indication that the talks had gone smoothly.

Chung’s delegation had dinner in Pyongyang, which was not originally planned. However, unlike their visit in March, they did not share a meal with Kim Jong-un during this visit.

The delegation returned around 9:40 p.m. to Seoul, and Chung headed straight to the Blue House to brief President Moon.

North Korea’s state media extensively covered Moon’s special envoy’s visit to Pyongyang and his meeting with leader Kim Jong-un, describing the talks as having a “compatriotic and warm atmosphere.”

The state-run Rodong Sinmun’s Thursday front page showed multiple photos of Kim welcoming Moon’s delegation. The front-page article emphasized advancing inter-Korean relations, while an opinion piece on page six underscored that its stance on resolving issues through dialogue and negotiations has not changed. It urged the United States not to delay a declaration to end the Korean War.

The North’s official Korean Central News Agency (KCNA) reported that Kim, after reading Moon’s letter, expressed thanks to the president for sending the letter, “which expressed a firm will to wisely overcome many challenges in the future, too, and open a bright future of our nation while appreciating the fresh advance in the relations between the North and the South.”

Kim was quoted as saying he “highly appreciates and always feels grateful to President Moon Jae-in for his sincerity and hard work for the DPRK-U.S. summit, the first of its kind in history,” referring to the acronym for the North’s official name, the Democratic People’s Republic of Korea.

The North has traditionally been known to be more interested in negotiating directly with the United States and has often left the South out of the equation.

Kim “exchanged wide-ranging opinions” with Moon’s delegation over the schedule for the Pyongyang summit and its agenda, and “came to a satisfactory agreement with it,” reported KCNA.

Kim also convey his “will to completely remove the danger of armed conflict and horror of war from the Korean Peninsula and turn it into the cradle of peace without nuclear weapons and free from nuclear threat.”

The leader was reported by KCNA to have been pleased with recent reunions of families separated during the Korean War, inter-Korean military talks and the progress in setting up a joint liaison office.

The Blue House said that Kim’s timeline of denuclearization by the end of Trump’s first term as president signified the North Korean leader’s sincerity on this issue, and also implied the signing of a peace treaty.

“Since U.S. presidential elections happen in November 2020, there are two years left,” Kim Eui-kyeom, the Blue House spokesman, told reporters Thursday, and leader Kim Jong-un “was expressing his willingness to realize denuclearization by then.”

The presidential spokesman further noted, “In the Korean Peninsula peace process, an end-of-war declaration is only the entrance, and at the point when there is a complete denuclearization of the peninsula, a peace treaty would be signed. Thus, I believe that realizing denuclearization within President Trump’s first term is also taking into consideration a peace treaty.”

Trump and Moon held a phone conversation Tuesday evening, ahead of the special envoy’s Pyongyang trip. The Blue House spokesman said that Trump had asked Moon to play the role of “chief negotiator” to mediate between Washington and Pyongyang.

But it is unlikely that a trilateral summit between Moon, Kim and Trump will take place later this month on the sidelines of the UN General Assembly in New York. Moon, who is expecting to give an address at the assembly, is set to hold bilateral talks with Trump.

Chung held a phone call with John Bolton, the White House national security adviser, Thursday evening, to brief him on his Pyongyang visit.

Around the same time, President Trump tweeted: “Kim Jong Un of North Korea proclaims ‘unwavering faith in President Trump.’ Thank you to Chairman Kim. We will get it done together!”