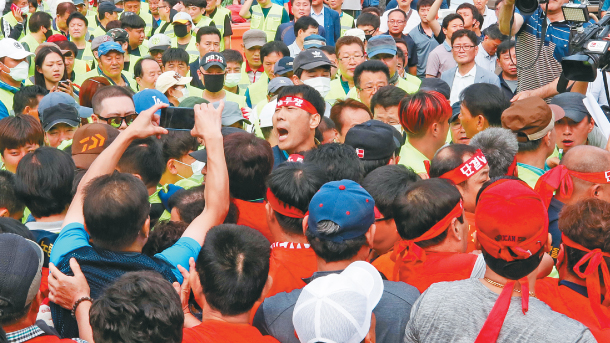 Some 300 officers and temporary hires dispatched by a local court tried to shut down stalls at 9:10 a.m. Nearly 200 vendors stood in front of the entrance to the building with interlocked arms, refusing to budge.

Scuffles broke out and the officers stepped back. They tried again at 9:45 a.m. and again at 10 a.m. and then decided to retreat until the court issued another order.

Thursday was the third time the court had issued an order to remove the vendors from the building. The first was in April last year and the second last July.

The problem dates back to March 2016, when the National Federation of Fisheries Cooperatives decided to move the Noryangjin fish market from the nearly 50-year-old building to a new venue nearby. The move was part of a local renovation project.

Some vendors moved from the old building to the new, but many stayed behind, complaining of higher rents in the new building.

Currently, there are 432 vendors in the new Noryangjin fish market building and 294 vendors in the old one, according to the National Federation of Fisheries Cooperatives, which runs the market.

The federation brought the case to court in 2016, claiming that the contracts for the vendors to operate at the old building ended in March 2016. The court ruled in favor of the federation, which was approved on appeal, and upheld once again by the Supreme Court on Aug. 21.

The vendors at the former building vowed to keep up their fight.

“The decision to forcibly move us out of the space signals an intention to stop talking and communicating with us in a civil manner,” said Yoon Hyun-joo, head of the Noryangjin Fish Market Association of the Korea Democratic Street Venders Confederation, who runs a stall in the old building. “The vendors will unite to keep our space safe.”

“The space for each stall is smaller and the hallways feel narrower yet the rent is higher,” said Lee Myun-sook, a 53-year-old vendor in the old building. “Another reason to keep the old market is that it is better known among foreigners. We should preserve a space like this.”

The space for the average stall has been reduced from 6.61 square meters (71 square feet) in the old building to 4.96 square meters in the new.

A spokesperson for the federation told the JoongAng Ilbo that the higher rent “includes the additional costs incurred to build a more comfortable and convenient place” for the vendors. The federation said it had even offered incoming vendors free rent for the first four months, but many didn’t take the option.

The federation plans to ask the court’s assistance once more to remove the vendors from the old building.

“We hope to solve this problem as soon as possible,” the spokesperson said.

“The federation is renting out space for us to do business here,” said a vendor who has a stall in the new building. “It’s not like I own the land. If they ask us to move, we should move.”

“Ever since we split into two locations, our businesses suffered,” said another vendor in the new building. “Some customers complain they don’t want to come because we have this fight going on.”

“Since 2016, the federation has been losing some 10 billion won every year over the issue,” said a spokesperson for the National Federation of Fisheries Cooperatives. “The situation is not helping the federation or the vendors.”