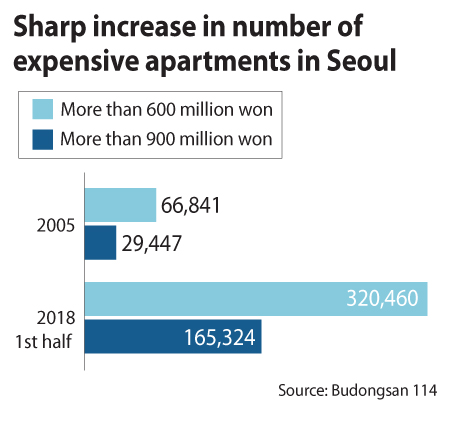 The government, the Blue House and the ruling party are all looking into raising the comprehensive real estate tax rate back to the level when it was first adopted in 2005 by the Roh Moo-hyun administration.

The three parties on Thursday agreed to toughening the comprehensive real state tax, which will be one of the measures the government plans to announce next week to cool off the overheated property market. Another measure will be to increase the supply of apartments in the greater Seoul area.

The maximum rate for the comprehensive real estate tax may be raised from 2 percent to 3 percent. The Lee Myung-bak administration lowered it to 2 percent a decade ago.

In July, the government raised the maximum rate to 2.5 percent while keeping the lowest rate at 0.5 percent.

The three parties are also looking into lowering the value at which the tax kicks in from the current 900 million won ($802,200) to 600 million won, which is a reversal of changes made during the Lee administration. Also it is looking into reducing an 80 percent deduction on the capital gains tax when a property owner owns an apartment for more than 10 years.

“We’re discussing [with the government about] raising the tax on people who own more than three apartments or those who own a single, exceptionally expensive apartment,” said Kim Chung-woo, a Democratic Party lawmaker on the National Assembly Strategy and Finance Committee.

As apartment prices in certain areas in Seoul have continued to rise despite the numerous government attempts to cool the market down, many investors have opted to buy a single apartment in expensive neighborhoods instead of owning a number of apartments.

In terms of financing, the government is looking into limiting jeonse, or long-term deposit, loans to people who own a number of apartments or people with high incomes.

It also wants to limit loans to private rental businesses that people are using to buy property.

After the government tightened qualifications for mortgages, many investors have turned to jeonse loans and loans that are borrowed as private rental housing businesses, which have less strict requirements. In the case of the latter, a person can borrow up to 80 percent of an apartment’s value, in contrast to a 30 percent limit for mortgages, on property areas labeled by the government as being rife with speculative buying.

A common stance on toughening the comprehensive real estate tax by the government, Blue House and the ruling party is a shift from the contrary positions they have held recently.

But Blue House policy adviser Jang Ha-sung has been skeptical of the notion. During an appearance on a radio show on Wednesday, Jang said raising real estate taxes isn’t the ultimate solution.

“But the taxes shouldn’t be raised uniformly. We need to find a reasonable level.”

Economy and Finance Minister Kim Dong-yeon has been cautious on the issue. During a meeting with reporters in July, Kim said gradual measures should be taken into consideration to prevent a major impact on the market.

Prime Minister Lee Nak-yon on Thursday raised concerns about the disaccord saying, “The government and ruling party needed to be more cautious on sensitive issues such as housing prices,” during a meeting with high-ranking government officials.

If the changes are adopted next year, the amount of taxes that the government will likely collect, as well as the number of people subjected to the tax, will likely return to the level when it was first applied - or go even higher.

In July, the government raised the maximum comprehensive real estate tax rate to 2.5 percent and decided to gradually increase the taxable amount of the government-assessed value from the current 80 percent to 90 percent by 2020.

In the following year, the government changed the regulation to levy the tax on the combined value of real estate owned by a household.

Those numbers saw sharp drops when the Lee administration raised the amount at which the tax kicked in from 600 million won to 900 million won and lowered the rate to 2 percent. It even offered discounts to senior citizens.

According to real estate information provider Budongsan 114, since 2005, the number of apartments whose value exceeds 600 million won and 900 million won have grown significantly.

As of the first half of this year, apartments whose government-assessed value exceed 600 million won amounted to 320,460 units, quadruple the 66,841 figure in 2005.