The ‘Leonardo da Vinci of robots’ on learning by failing

The ‘Leonardo da Vinci of robots’ on learning by failing

Dennis Hong, a professor of mechanical and aerospace engineering at the University of California, Los Angeles, during an interview with the JoongAng Ilbo last month. Hong said failure has helped him grow in his professional and personal life. [KIM KYUNG-BIN]

A three-legged robot, an air-powered hand and the world’s first car that can be driven by the blind. If there’s anything that Dennis Hong can’t create, he hasn’t conceived of it yet.

The professor of mechanical and aerospace engineering at the University of California, Los Angeles, has built dozens of robots inspired by machinations observed in everyday life from the movements of a deer to the shape-shifting locomotion of an amoeba. His team has won RoboCup, the World Cup of robotics, five years in a row, and The Washington Post Magazine once called him “the Leonardo da Vinci of robots.”

The son of a renowned aeronautical engineer, Hong is a role model in Korea, where his lectures often fill up rooms. He has earned a reputation for churning out novel designs off flights of fancy, but it took years of failure and frustration for Hong to reach where he is today. Despite the difficulties, Hong said he never lost sight of his dream.

Below are edited excerpts from an interview with Hong during his most recent trip to Korea last month. 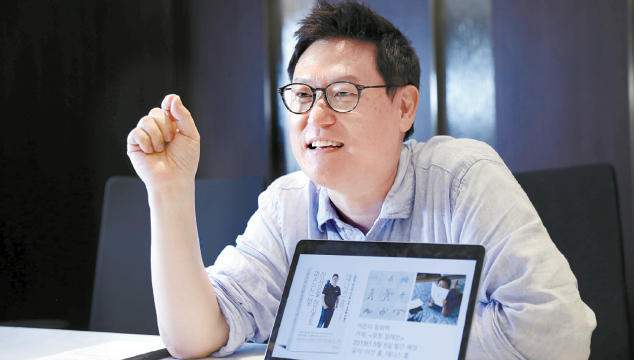 Dennis Hong explains a picture book that he plans to write with his son.[KIM KYUNG-BIN]

Q. Are you always this cheerful, or are you more serious when no one’s around?

A. I’ve always been like this. That’s why my mother named me after Dennis the Menace. Some people think I might be living a lie, you know always being like this, but this is who I am. You cannot really hide what you are, right? I am not afraid of showing who I am. I try to be polite, but I do not mind what other people think.

Have you always been this successful?

No. That might be what people want to see — success without failure. When I meet with Korean students, I’m always seen as someone who hasn’t known failure, but I am not a genius, and I have failed so many times, including when I was interviewing to become a professor. One time, after I became a professor, my research proposal was rejected and I had no funding for two years. I would cry at night in the lab. And whenever I tried new things in the lab, there were many people around me who would criticize my attempts and say I was mad. 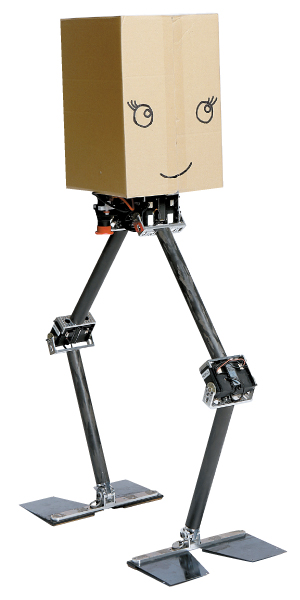 What was the most difficult time in your life?

That was 2014 when I moved from Virginia Tech to UCLA. I lost all the robots I made, betrayed by someone whom I thought was my mentor. I lost my humanoid robot, which was my masterpiece. I thought my career was done. I could not see any future path for me. Without my robots, I could not do anything, I thought. But robots, as well as humans, learn by stumbling and falling down. I realized this is true and decided I would start fresh. I had a turnaround after seeing the limits of humanoid robots at the Fukushima Daiichi site. The robot was slow and would fall often.

I decided to adopt a different idea and changed the design of my robots to solve issues I saw around me. Walt Disney was filled with dreams when he created Oswald the Lucky Rabbit, but his dreams were nearly shattered when a producer he trusted took that away from him and he lost everything. But instead of giving up, he started to draw other characters, and Mickey Mouse was born. If the robots I developed were not taken away from me, I would not be where I am today.

Failure makes you learn, and you cannot see success if you are afraid to fail. Innovation is the same. Innovation occurs when you are on the edge, about to fall. If you play it safe because you are afraid of falling, you will never innovate. At my laboratory, I tell my students to break their robots because that’s how they can learn. If you succeed, enjoy it, but if you fail, you have just learned something. What’s important is that you stay positive regardless of the situation. Optimism always finds a way — that is my credo. If you learn from your failures, you will no longer fear failure.

How did your lab, RoMeLa, do so well?

People around me say it is a horizontal leadership. I stay close to my students as if they’re my friends. I also made the lab nice and fun for students to visit. Some even joke about how they like the lab more than nearby Disneyland. My idea of leadership is that a leader must also be a cheerleader. If I take on that role, I can feel the lab is filled with a creative vibe. People talk about the disparity between reality and ideals, but I think the results we have shown prove that idealism works. The best thing that came out of our lab has not been the robots or technology or even the patents we have developed over the years but our graduates.

Where do you get all the creativity?

Probably more from the heart than the brain. It’s important that we continuously think about something new and different. I do not give any assignments to researchers who need answers. Children’s eyes sparkle because they are filled with curiosity. Without curiosity, there is no creativity.

Why do you say your life goal is the happiness of others?

I had four different dreams while growing up: being a cook, a magician, a theme park designer and a robotics engineer. All of them are about making others happy. I think that’s just how I am. Above all else, when I saw a visually-impaired person driving and leaving the car I invented with all smiles, I realized that is happiness and something that I can set as my life goal. It is also what made me be interested in developing robots to help the weak and [those] in disasters.

Do you think there will come a day when robots overcome humans?

People think there will be robots that can think and act like humans, but realistically, that’s impossible. Artificial intelligence is a useful tool for people, and we don’t need to be afraid of those tools. We just need to know how to use them well.

What do you think about the “fourth industrial revolution?”

I get this question a lot, but I am not sure what the “fourth industrial revolution” is. We don’t really use this term in Silicon Valley — I think it’s more used in Korea, which I find interesting. Outside of Korea, we refer to more specific concepts like artificial intelligence.

What does it mean to be a father?

My son, I-san, is nine years old and my best friend. I try to spend more time with my family rather than sleeping. It’s fun playing with my son. The most effective way for anyone to change the world is to raise their children well and teach them how to be happy. These kids will change the world when they grow up, and I want to be that kind of father.

Unlike others in the field, I make all sorts of robots. The general public would think they’re all the same, but from the perspective of field experts, they cannot understand why I make all different types of robots rather than focusing on one. Luckily, many of them have become huge hits, so I didn’t get criticized too much. So when someone asks me about my future plans, my answer is that I don’t know at this point. Whenever an idea pops into my head and I think it is something that the world needs, I dedicate myself to it completely.

Is there anything you want to say to the young people of Korea?

I think it’s important that we reconcile what we like to do and what we do well. This would give us the passion and decent results. If you think the path you are on does not suit you, you should abandon that path and find some other path. I give things up every day doing this.
Another thing is that, even if the future seems bleak, do not let go of your dream. The biggest enemy of our dreams is not failure but giving up.