More than 1,000 people made sick from cakes

More than 1,000 people made sick from cakes 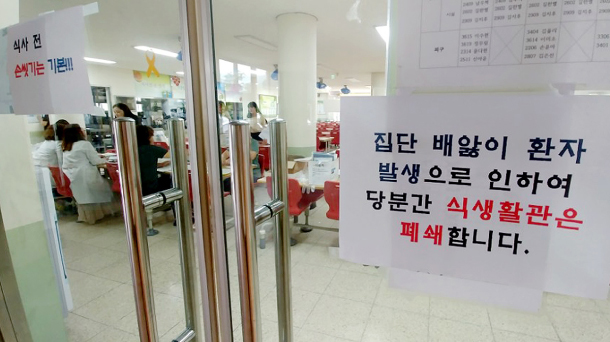 A cafeteria in a middle school in Wanju County, North Jeolla, was shut down on Friday after students got sick. [YONHAP]

Over 1,000 people, mostly school children, got sick across the nation after eating a chocolate cake distributed by a Pulmuone affiliate, local health authorities announced Friday.

No serious illnesses have been reported, although some victims are receiving medical treatment in hospitals. The Ministry of Food and Drug Safety said salmonella, a common type of food-poisoning bacteria, was detected in the cake.

A total of 1,156 people who ate the dessert in 29 cafeterias across the nation, mostly in schools, reported symptoms of food poisoning as of 9 a.m. on Friday, said the ministry.

Most persons infected with salmonella develop diarrhea, fever and abdominal cramps 12 to 72 hours after infection, according to descriptions from the Centers for Disease Control and Prevention. The illness usually lasts four to seven days and most people recover without treatment.

Pulmuone said it recalled the chocolate cake and halted all distribution and sales of the product.

The product, Chocolate Blossom Cake, was made by the W1FNB food company in Goyang, Gyeonggi, and distributed by Pulmuone Foodmerce, which has its headquarters in Yongin, Gyeonggi.

According to the ministry, W1FNB produced 6,732 kilograms (14,841 pounds) worth of chocolate cake and packed them in 7,480 boxes from Aug. 8 to Sept. 5. Some 3,080 kilograms in 3,422 boxes were given to Pulmuone Foodmerce to distribute; the balance was either stored or thrown away.

The snack was provided to 169 schools, two kindergartens, 12 Pulmuone Foodmerce buildings and one local community center for children, bringing the total number of establishments to 184.

The Food Ministry said it was awaiting further results to determine the exact cause of the food poisoning. Local authorities are investigating the companies that sold raw food materials to W1FNB, said the ministry.