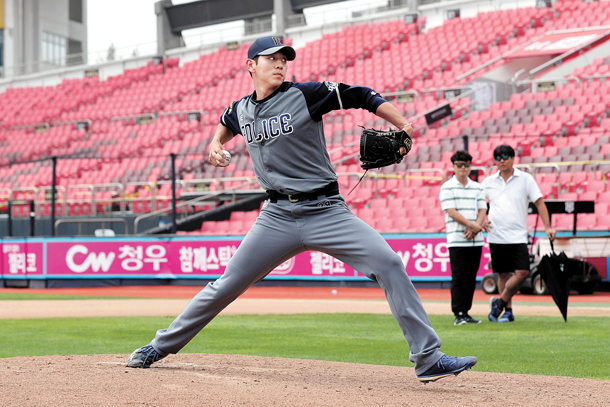 Rhee Dae-eun throws a pitch during an open tryout ahead of the annual KBO draft at KT Wiz Park in Suwon on Aug. 20. [YONHAP]

A handful of former U.S. minor league prospects will headline the annual draft in Korean baseball this week.

The Korea Baseball Organization (KBO) will hold its draft for the 2019 season today in Seoul, and without big prospects among high school seniors, the spotlight will be on those who once plied their trade in the minors.

Those who finished high school in Korea and played for foreign professional clubs without having competed in the KBO are eligible for the draft, as long as their initial pro contract expired before Jan. 31, 2017.

Overseas-based amateurs who have never played as a pro in Korea and those who graduated from schools outside Korea and played pro ball overseas may also enter the draft.

The draft will be held in reverse order of the 2017 regular season standings, meaning the KT Wiz will have first pick, followed by the Samsung Lions, the Hanwha Eagles and so forth. The Kia Tigers will pick last. Each of the 10 clubs can pick up to 10 players.

Rhee, 29, is expected to go first overall. The right-hander reached only as far as Triple-A in 2014 in the Cubs system and pitched for two years with the Chiba Lotte Marines in Nippon Professional Baseball (NPB).

In the U.S. minors, Rhee compiled a 40-37 record and a 4.08 ERA in 135 appearances. The Wiz believe that Rhee, with a hard fastball that reaches over 150 kilometers per hour (93 miles per hour) and a forkball, can immediately become an important part of their rotation.

Lee, once a highly-touted defensive whiz at shortstop, was plagued by a series of injuries and also never got past Triple-A. Most recently, Lee played in 47 games for the San Francisco Giants’ Triple-A affiliate in Sacramento, batting .265 with three homers and 12 RBIs.

Among others, former Baltimore Orioles prospect Yoon Jeong-hyeon could go early in the draft. The 26-year-old left-hander was an eight-round KBO draft pick by the Lotte Giants in 2012, but chose to pursue collegiate studies instead. He dropped out of Dongguk University in Seoul during his freshman year.

The highest level Yoon reached was low-A ball in 2016. He completed his military service last month.