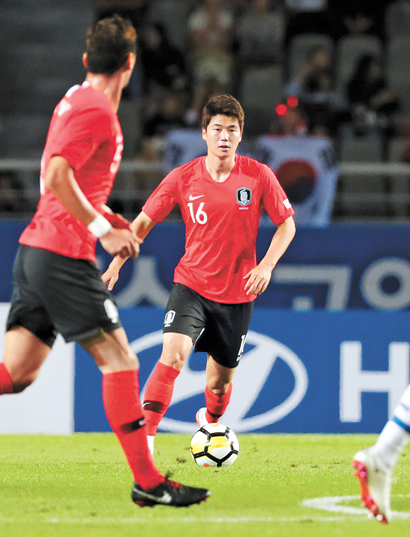 Korean midfielder Ki Sung-yueng said Friday that he is still mulling retirement from the national team but would not do so until the Asian Football Confederation (AFC) Asian Cup next year.

Ki played his 106th match with Korea at Goyang Stadium in Goyang, north of Seoul, where his team collected a 2-0 win over Costa Rica in a friendly.

After the 2018 FIFA World Cup in Russia, where Korea suffered a group stage exit with one win and two losses, Ki hinted at national team retirement. He said that option is still on the table.

“My mind hasn’t changed,” Ki said. “And I expressed my thoughts to the new head coach.”

The 29-year-old said he now feels added burden while carrying out his international duty. For this season, Ki is having a new start in his English Premier League career after moving from Swansea City to Newcastle United.

“Playing with a foreign club, I do feel pressure traveling to my home country,” he said. “It’s not only about my physical condition. I had doubts whether I can devote myself 100 percent to the national team. I’ve had serious discussions about this with seniors around me.”

However, Ki said he will not quit the national team before the 2019 AFC Asian Cup, which will be held in the United Arab Emirates in January.

“Bento first told me to stay with the national team,” he said. “If the team needs me, I think it’s right for me to play with my teammates until the Asian Cup.”

Against Costa Rica, Ki, a long-time captain of the national team, didn’t wear his usual armband. His younger teammate Son Heung-min took the role instead.

“I actually feel relieved [after giving up the captaincy],” he said. “I already told the coach that Son is the right man to be the captain. The national team captain needs to be served by a player who can best represent the country. I just need to help him along the way.”

Ki only played 45 minutes against Costa Rica but showed his class by creating a scoring chance for Korea in the 34th. He delivered a long pass to Nam Tae-hee, who was brought down by Christian Gamboa in the box for a penalty kick. Son hit the right post with his spot kick, but Lee Jae-sung slotted the ball home in his follow-up attempt.

“We were playing the match with good form,” he said. “Plus, when a new coach comes, all the players work hard. It’s important for us to keep up this level of play.”

“As far as I know, Ki will stay with the national team,” Bento said. “There’s no doubt about that.”

Korea will play its second friendly match under Bento against the 12th ranked Chile at Suwon World Cup Stadium tomorrow.